The Century Club of San Diego held a luncheon Aug. 24 at the Town and Country Resort Hotel to announce raising of $1.36 million during the 2011 Farmers Insurance Open. The funds will benefit 200 San Diego area charities including 91 high schools that participated in the club’s annual Support our Schools program. The 2011 tournament raised $321,800 for the schools. In addition, $100,000 goes to military organizations including Wounded Warrior Project, Naval Special Warfare Foundation, and Semper Fi Fund … The UC San Diego Moores Cancer Center held its 18th annual Luau and Longboard Invitational on Aug. 21 at La Jolla Shores. This year’s event raised $420,000 which goes to fund cancer research. Pfizer La Jolla was the title sponsor for the fourth year in a row. The Rell Sunn “Queen of Makaha” Award was presented to Dennis Carson, M.D., and director of the UC San Diego Moores Cancer Center from 2003 until this July. The award was established in memory of Rell Sunn, a Hawaiian surfer and supporter of this event, who lost her battle with breast cancer. Carson was recognized for his numerous achievements during his tenure with the cancer center … Sprinkles Cupcakes in La Jolla teamed up with San Diego Padres second baseman Orlando Hudson on July 29 to kick off a week long fundraiser for Hudson’s charity, the Catch Foundation, which funds programs providing therapy, education and extracurricular activities for children with autism. Store founders Candace and Charles Nelson donated the $4,000 net amount of the sale of the cupcakes to the foundation … Shaney jo Darden, co-founder & CEO of The Keep A Breast 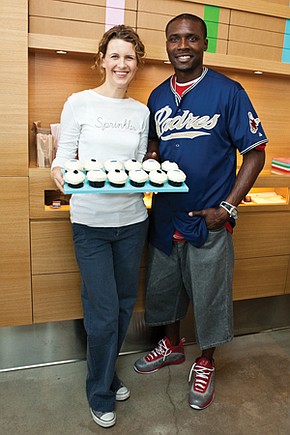 Candace Nelson, founder of Sprinkles Cupcakes in La Jolla, teamed up with Orlando Hudson of the Padres to raise money for his Catch Foundation, which supports autism programs.

Foundation is set to receive the Surf Industry Manufacturers Association’s Humanitarian Fund 2011 Humanitarian of the Year Award at Liquid Nation Ball 8, a fundraiser for the Sima Humanitarian Fund on Sept. 17. “As a woman who has had such a positive impact on the health and awareness of hundreds of thousands in the action sports industry, her work and passion are inspiring, said Fernando Aguerre, Sima Humanitarian Fund president … Healing Our Heroes’ Homes, a program of the organization Embrace, focuses on restoring homes of low-income, disabled veteran homeowners. Embrace’s mission is to mobilize college student volunteers to serve less fortunate members of civilian and veteran communities. Local students carried out their first home restoration project July 30. The first home located in Escondido belongs to a couple of Vietnam veterans. The remodel effort was valued at $16,000 … Sempra Energy awarded scholarships to students from San Diego as part of the company’s annual scholarship program for children of employees. The program offers support to students at a four-year college or university, community college, or trade or technical school. The scholarship winners can use the funds for tuition and fees, room and board, books and other related expenses … Bail Hotline Bail Bonds held its 2nd Annual “1000 Backpacks Giveaway” on Sept. 7 at the Boys & Girls Club in Logan Heights. Free backpacks were given to elementary school students in the Logan Heights area … San Diego Police Foundation is presenting its Friends of the Badge luncheon Sept. 21. The event is being held at Valley View Casino Center at noon. Guests will experience the latest in police technology and ways to support SDPD at the 11th annual fundraiser for the foundation … San Diego Humane Society raised $250,000 at its 25th Anniversary of the annual Fur Ball gala Aug. 20 which was held at the Gaines St. location. “Dancing with the Dogs” raised funds to support its programs and services for both animals and people in the San Diego region. Some of the sponsors were Edco, San Diego County Credit Union and Wells Fargo.