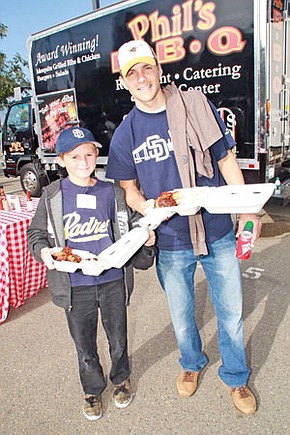 The Gary & Mary West Foundation gave a $250,000 grant to the “Reboot” program to fund the workshops for veterans. The three-week course is provided by the National Veterans Transition Services Inc. and helps veterans ease back into civilian life after service. Reboot was launched by retired Navy Rear Adm. Ronne Froman and retired Master Chief Petty Officer of the Navy Maurice Wilson in response to the growing number of military service members returning to civilian life. Reboot was also named one of Southwest Airlines’ recipients of a ticket giveaway in honor of the airline’s 40th anniversary … Susan and Bill Hoehn are honorary chairs for the Ronald McDonald House Charities ROMP Roundup set for Sept. 17 at the Ronald McDonald House. To help raise funds for families of seriously ill or injured children being treated at local hospitals, the Hoehns have donated a 2012 Audi A-3 from Hoehn Motors — Carlsbad. Tickets are being sold at $100 each with all proceeds going to RMHC San Diego. The winner has the option of the car or $30,000 in cash also donated by the Hoehns. In addition to the Hoehns’ contributions to RMHC, they are also being recognized for all of their support to the San Diego community … Walden Family Services received a $25,000 grant from the Hervey Family Non-endowment Fund at The San Diego Foundation. Other grants received for the foster care program were $2,500 from the Santreece Foundation, and $1,000 from Cox Kids Foundation. A $3,500 grant was received from the Mission Federal Credit Union to help support Walden’s Independent Futures program. “We are so grateful to have wonderful community partners which allow us to continue to serve the many children and families who rely on our services,” said Teresa Stivers, executive director of Walden Family Services … The third annual Classy Awards is set for Sept. 17 at the San Diego Civic Center. Official sponsors for the event are Southwest Airlines, Qualcomm and Bridgepoint Education. Stay Classy is a leader in social fundraising for nonprofit organizations. More than $150,000 in cash and prizes will be awarded to charitable organizations supported by the 12 Classy award winners … Chuao Chocolatier donated $8,000 to the UC San Diego’s “Invent the Future” campaign to help fund student scholarships and graduate fellowships. The donation is part of the company’s year-long celebratory campaign in conjunction with the university’s 50th anniversary. UC San Diego alumnus Michael Antonorsi and his brother Richard Antonorsi founded the company, which is located in Carlsbad, in 2002… The third annual BIG BBQ at the Ballpark was held Aug. 15 raising $50,000 for Big Brothers Big Sisters. Phil’s BBQ partnered with Bigs to raise money for Operation Bigs which serves children of deployable military parents by providing one-on-one mentoring. “We are very thankful to our fans and staff for supporting us,” said Phil Pace, owner of the popular eatery … The late Matt McLaughlin, who was a longtime North County resident, left a $10 million legacy endowment gift to launch a matching grant program at The San Diego Foundation to cultivate charitable giving throughout San Diego’s North County communities. “The remarkable generosity of Matt McLaughlin commemorates for generations to come, his love of philanthropy and community involvement,” said Bob Kelly, president and CEO of The San Diego Foundation.