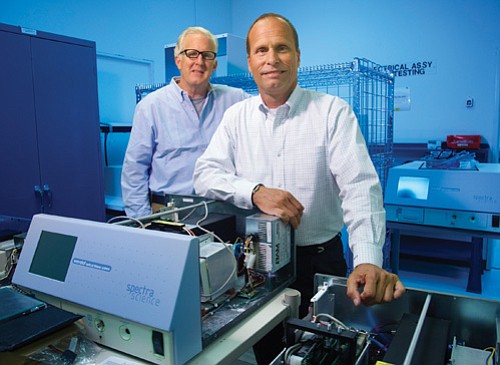 Jim Dorst, left, and Michael Oliver of SpectraScience Inc. are launching the company’s first product in Europe, which offers an easier path to market than the United States. Photo by Stephen Whalen.

Success in the medical device business doesn’t come easy, particularly on the diagnostics side.

First, you’ve got to find investors who believe in your science and technology. Next, there’s the arduous process of Food and Drug Administration approval. And finally, you need to reach the customers — oftentimes hospitals — with a diagnostic tool that they’re convinced will be so essential that they’ll spend their hard-found money to buy it.

Like many local diagnostic companies, San Diego-based SpectraScience Inc. has decided to problem-solve by launching its first product overseas.

Its device, which uses a laser beam of cool light to instantaneously determine if a tissue is cancerous or not, has actually been FDA approved since 2000, but it hasn’t yet been assigned a so-called “CPT code” or current procedural terminology code, which is needed in order for hospitals to be reimbursed by Medicare or commercial insurers, said Michael Oliver, president and CEO of the microcap company. “You can get paid under a miscellaneous code, but it’s a pain in the neck to do and it’s a red flag for insurers,” he said.

In Europe, where doctors tend to be salaried and medical procedures aren’t billed like they are in the U.S., SpectraScience’s WavSTAT optical biopsy system can begin selling right away. The company is preparing to officially unveil the product later this month at the United European Gastroenterology Week conference in Stockholm. “It will be easier to sell in Europe because we don’t have that systemic barrier,” Oliver said. “But we’ll be turning our focus back to the U.S. in the future.”

In the meantime, Oliver said, the gastroenterology community in the U.S. is looking at what code would be appropriate for the product. By the time SpectraScience is ready to launch domestically, Oliver said he believes U.S. hospitals will be receptive to the product. “The health system in the United States is changing and everyone is focused on lowering costs,” he said. “That’s right where we fit in. We’re a much more cost-effective alternative than traditional pathology.”

Despite the challenges in bringing a diagnostic product to market, particularly on the regulatory front, San Diego has proven to have all the right ingredients for a robust industry, said Jon Vance, founder and managing director of MedDx Capital Advisors, a La Jolla investment banking firm that focuses on in-vitro diagnostics and lab companies.

The city has just the right mix of established players, such as Quidel Corp., Illumina Inc. and Gen-Probe Inc., along with a host of smaller companies and startups like Astute Medical Inc., Vance said. “San Diego has such a great ecosystem of people and technology for diagnostics,” he said, noting that the robust drug-development scene here is also an asset for diagnostic medical device companies.

In fact, the strength of this ecosystem is what convinced Vance in April to leave his longtime job leading the West Coast health care investment banking efforts for Avondale Partners LLC, based in Nashville, Tenn., to start his niche business here in April. Now he’s advising growth-stage diagnostic companies on raising capital and other strategic business moves.

Considering that public markets don’t tend to be enthusiastic about diagnostic IPOs, many device and test makers are destined for a merger or acquisition, Vance said. “This market always has, and will continue to favor M&A,” he said.

Two major deals this year illustrate that point. First, in late January, Swiss pharmaceutical giant Novartis AG said it would acquire Carlsbad-based laboratory diagnostics services company Genoptix Inc. in an all-cash offer worth $470 million. The board of Genoptix unanimously approved the transaction. According to Novartis, the acquisition will support the development of companion diagnostic programs, particularly in oncology, and advance the company’s ability to define and monitor personalized treatment programs.

Then, in May, San Diego-based Prometheus Laboratories Inc., a specialty pharmaceutical and diagnostic company, announced that it would be acquired by Nestlé Health Science SA, a wholly owned subsidiary of Nestlé SA. Terms of the deal were not disclosed.

When mergers and acquisitions aren’t on the table, many diagnostic companies are seeking to team up with another industry player to grow sales or break into a new market, Vance noted. The most recent example in San Diego involves two major local companies: Life Technologies Corp. and Quidel. Life signed an agreement with Quidel to distribute and commercialize molecular diagnostic assays for the European market, where Life already has an established network.