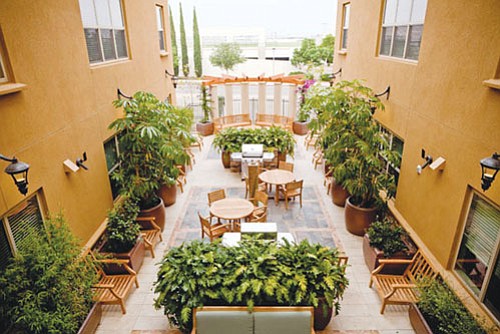 The project, designed by Joseph Wong & Associates, is a four-story, wood-frame construction building over a concrete parking garage and podium deck and was built for the development entity 55th & Hardy LLC. The design features open courtyards, a common room for recreation and maximizes sustainable building opportunities. The project is pursuing Leadership in Energy and Environmental Design certification and was open for leasing in August 2011.

The Irvine Co. announced that two of its San Diego properties have been awarded prestigious Leadership in Energy and Environmental Design certifications, a designation reserved for the highest performing, most sustainable buildings.

To earn LEED Platinum certification, buildings have to score 80 or higher out of a possible 110 points, including bonus points.

The 101 W. Broadway site is only the second existing office building in San Diego to earn LEED Platinum (along with Glenborough LLC’s Aventine Office Building in UTC) and is among just a select number of buildings nationally with the honor, according to the Green Building Council.

Built in 1982, 101 W. Broadway is among few from its era to hold LEED Platinum status. It is the second Irvine Co. Office Properties building to earn LEED Platinum certification after Hyatt Center in downtown Chicago.

Chicken of the Sea Renews Its Lease for Six Years

According to CoStar Group, Chicken of the Sea International has renewed its lease for 28,769 square feet of office space on the fifth floor at 9330 Scranton Road in San Diego. This location at the Sorrento South Corporate Center is the company’s main headquarters. The new deal has a term of six years and is valued at $5.1 million.

Sorrento South Corporate Center is a two-building, 276,000-square-foot, six-story office campus. The Class A buildings have a fully equipped on-site fitness center and were awarded an Energy Star label in 2010 for operating efficiency. The West Building totals 157,034 square feet.