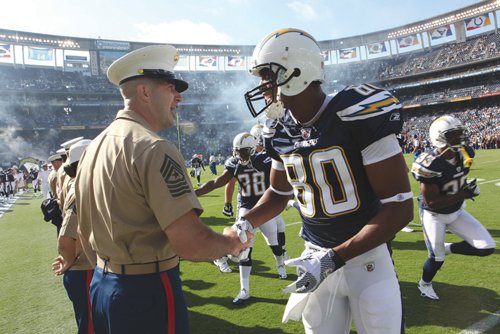 Whether it is lifting the spirits of deployed service members by showing them familiar faces from home, or recognizing Pearl Harbor survivors during pregame pageantry, the San Diego Chargers and San Diego Padres extend plenty of support to the U.S. military.

And they do a good job, said local executive John Pettitt.

“The Padres and the Chargers set the standard in the United States, as far as support to the military,” said Pettitt, president of the San Diego Military Advisory Council, an organization that brings civic, business and military leaders together to discuss matters of joint concern.

“I don’t remember an occasion where support was asked and refused,” Pettitt said of the teams’ relationship with the military.

The Padres won 71 games, lost 91 games and drew 2,143,018 people to downtown’s Petco Park during the ballclub’s 2011 season. But there is a less-reported number: The Padres donated roughly 37,000 tickets to San Diego’s military community in 2011. That’s according to Shana Wilson, a front-office representative of the team.

“We reach out to (the military) in a lot of different ways,” said Bill Johnston, a Chargers front-office representative. The National Football League is relatively strict about giving out free tickets, Johnston said. However, the team has ways to give individual sailors, Marines and soldiers a treat.

USAA, the San Antonio-based insurance, banking and investment company, is set to host a tent party for 100 military personnel and their families as part of the Chargers’ observance of Veterans Day on Nov. 10. The guests will get to watch the game against the Oakland Raiders at Qualcomm Stadium for free.

The Chargers will honor wounded veterans during pregame ceremonies and tell the stories of five veterans during halftime. During the second quarter there will be a time for all veterans in attendance to stand and be recognized.

The Padres also have big plans.

The baseball team wants to leverage one of its key resources, the ability to communicate with fans, to benefit those serving in the military — plus their families. That is according to Sarah Farnsworth, who joined the club in September as senior vice president of public affairs.

“The Padres really want to tell the story” of military families, said Farnsworth, who previously worked at the White House, the Pentagon and the USO.

U.S. Navy sailors or U.S. Marines may be on their fourth, fifth or seventh deployments, she said, while spouses may be trying to hold down jobs. Military dependents may have shuttled among four schools in six years. Bottom line: it’s a hard life.

In the future, Farnsworth said, the team plans to recognize the work of nonprofit organizations such as the Injured Marine Semper Fi Fund, based at Marine Corps Base Camp Pendleton, and Operation Homefront, based in San Antonio. Farnsworth said Operation Homefront is the kind of organization a military spouse can call in an emergency, such as the family car breaking down.

Such organizations “would not exist without corporate support,” she said.

The Padres have had a military outreach program since 1995 and has part of its website dedicated to military affairs. Going forward, Farnsworth said she wants to make the site more of “a community portal” — in other words, a resource to educate and promote the military community and those who support it.

“I think people want to help, but often they don’t know how,” Farnsworth said.

Of course, local players have a unique ability to cheer sailors and Marines by mingling with them. That can happen on the team’s home turf, at a military base or at the naval hospital in Balboa Park. Johnson said that every year, Charger players participate in workouts at San Diego County military bases.

Many members of the Charger Girls cheerleader squad have made overseas trips. Two visited Iraq in 2004. A group traveled to Germany in 2007.

And the cheerleaders were part of a 2009 Armed Forces Entertainment show aboard the San Diego-based USS Boxer, moored in Guam.

The Padres, for their part, give Sunday home games a military flair. Team members wear camouflage uniforms on the field. Petco Park spectators might also see a class from the Marine Corps Recruit Depot march into the stadium to take in a game. The recruits and drill instructors usually arrive to applause, said Farnsworth.

The military contributes to game-day pageantry in other ways.

Also familiar is the sight of military aircraft. Nothing can divert attention from the field quite like a Marine F/A-18 screaming overhead.