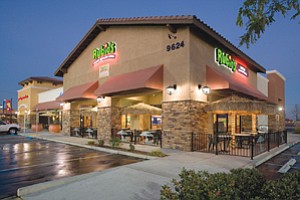 Some of the changes planned for Rubio’s include having the fish in its tacos hand-breaded in a beer-batter recipe, and there will be more emphasis on the seafood items that have differentiated the chain from its rivals.

For the new chief executive officer of Carlsbad-based Rubio’s Restaurants Inc., the first order of business is taking the company back to its origins as California’s first popular purveyor of fish tacos.

Restaurant industry veteran Marc Simon, who was named to his new post in late April after three years with the company, said customers this summer will see menu changes that will bring them back to 1983, the year Ralph Rubio and his father, Ray, opened their first Rubio’s in San Diego’s Mission Bay neighborhood.

With input from founder and Chairman Ralph, who remains active in menu and other planning, the company is incorporating recipes from those early days, when Rubio sought to replicate the unusual fish tacos he had sampled on a trip to the Mexican town of San Felipe.

Among other old-school shifts, the fish in those tacos will be hand-breaded in a beer-batter recipe, and there will be more emphasis on the seafood items that have differentiated the chain from its rivals.

Simon, who most recently served as Rubio’s chief operating officer after prior executive stints with firms including McDonald’s and Chipotle Mexican Grill Inc., said the strategy fits his own longtime focus on the elements — including food and service — that make a successful restaurant iconic.

“What I think is unique is that Rubio’s is a homegrown brand — it wasn’t created out of a focus group by some researchers and accountants,” Simon said, in a recent interview. “My priority going forward is understanding the DNA of this brand and communicating that to our customers.”

After some rocky years as both a private and public company, Rubio’s last year was acquired by Mill Road Capital LP, a Connecticut-based investment firm, which took the company private by purchasing its outstanding stock shares for approximately $91 million.

“Mill Road has been very good about letting us make our own decisions day-to-day on how we develop this brand,” said Simon.

As an operations person for most of his career, Simon said he plans to spend considerable time on the road visiting the company’s restaurants, known as Rubio’s Fresh Mexican Grill, which now number more than 200 across five states.

According to Chicago-based restaurant industry consulting firm Technomic Inc., Rubio’s competes in a fast-casual restaurant category — with meals averaging about $8 to $10 — that includes 20 large regional and national chains serving up Mexican-style food. That segment tallied more than $4.2 billion in U.S. sales during 2010, up 9 percent from the prior year.

The category is led in sales by Denver-based Chipotle Mexican Grill, followed by Qdoba Mexican Grill, operated by a division of San Diego-based Jack in the Box Inc. Others with a large California presence include Moe’s Southwest Grill and Baja Fresh Mexican Grill.

Technomic reports that Rubio’s had just over $191.8 million in 2010 sales, on par with 2009, placing it seventh nationwide in its category.

Darren Tristano, an executive vice president with Technomic, said Rubio’s generally has held up well in sales, despite recent inroads by fast-growing national competitors such as Chipotle, Qdoba and smaller regional rivals including Wahoo’s Fish Taco, which is based in Santa Ana.

“They’ve done a good job of building customer loyalty, and they have differentiated themselves within that larger region that stretches from Los Angeles down into San Diego,” Tristano said.

Simon is no newbie in the world of Mexican fast-casual fare. From 1994 to 1998, he was vice president of corporate development at McDonald’s, where he helped identify, negotiate and complete the company’s first nonhamburger investment, Chipotle Mexican Grill.

He later joined Chipotle as a regional director and developed key markets, including Chicago, Minneapolis and Wisconsin, ultimately opening 144 new units. Chipotle today has more than 1,000 restaurants, with annual sales surpassing $1.8 billion, according to Technomic.

Similar to what helped Chipotle gain a cultlike status for its burritos in its early days, Simon said Rubio’s strategy in coming months involves focusing on the “soul of the brand,” which got it noticed among locals in the first place.

“The fish taco is as iconic to San Diego as jambalaya is to New Orleans, or cheese steaks are to Philadelphia,” Simon said.