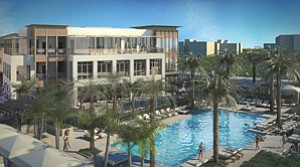 Sudberry Properties has obtained nearly $60 million in construction financing for Circa 37, an apartment complex that will be the first element at the larger mixed-use Civita development in Mission Valley.

The latest quarterly distress report from brokerage and consulting firm Atlas Hospitality Group finds many California hotels still suffering debt hangovers stemming from the Great Recession, even though overall hotel business has been on the upswing for much of the past year.

In the first quarter, San Diego County saw the number of properties in some stage of loan default drop 20 percent from the same period a year ago, going from 34 to 27. However, hotels that had been foreclosed on by their lenders rose from six a year ago to 17 at the end of the latest quarter.

Despite the fact that California is enjoying increasing revenues per available room in nearly every market, Atlas President Alan Reay noted that the hotel industry continues to experience high levels of loan distress, especially in the secondary and tertiary markets.

That is due largely to the high levels of debt that many hotels are carrying. Irvine-based Atlas is predicting that hotel defaults and foreclosures will continue to increase through the first half 2011.

After that, defaults will start to level off, but foreclosures will continue to increase at least through the end of 2011, Atlas forecasts.

According to Smith Travel Research Inc., San Diego area hotels in the first quarter saw occupancy rise 4.5 percent from a year ago, while the average room rate increased 6.9 percent. Revenue per available room rose 11.7 percent, and total revenue for the market topped $416 million, for a 12.3 percent boost.

Apartments at Civita Get Financing: Developers have secured $59.5 million in loans for Circa 37, a 306-unit apartment complex planned as the first phase of Sudberry Properties’ Civita mixed-used development in San Diego’s Mission Valley.

According to the San Diego office of brokerage and capital services firm Holliday Fenoglio Fowler LP, which arranged the financing, the project will get a three-year, $47 million construction loan through Wells Fargo Real Estate Group Inc. Also, a $12.5 million mezzanine loan was secured through a life insurance company.

Circa 37 is named for 1937, the year when a former rock quarry at the site was first mined. Developers said the apartment complex, with first move-ins expected in April 2012, will have 11 buildings with 306 apartments ranging from one to three bedrooms, averaging 948 square feet.

Jason Han, a partner in the company who also was recently named president of its San Diego and Orange County Division, said San Diego’s economy is “getting its legs more firmly” than most major California metro areas as the economy slowly recovers. Han said the builder sees the local market’s job gains and a growing contingent of young skilled professionals increasing the for-sale and rental housing demand.

The builder’s move comes as local housing construction continues to pick up steam, though not at pre-recession levels. According to the latest data from the Construction Industry Research Board, builders took out a total of $297.6 million worth of permits countywide for new single- and multifamily projects in 2011’s first quarter.