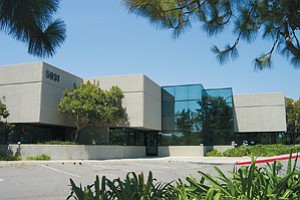 This building is among seven structures in two Carlsbad industrial parks purchased by Peregrine Realty Partners for $11.9 million. Photo by Photo courtesy of Colliers International

Peregrine Realty Partners has purchased two Carlsbad industrial parks for a total of $11.9 million, providing a strong second-quarter start to what has been a solid year for local industrial real estate.

Peregrine’s acquisition, which closed April 15, ranks among the highest-value industrial transactions of the year, according to local brokerage data. The Los Angeles-based investment and advisory firm bought the 78,326-square-foot El Fuerte Business Park on Loker Avenue and the 48,638-square-foot Carlsbad Oaks Commerce Center on Sea Lion Place, comprising seven buildings in all.

The seller was a partnership consisting of COCC Associates Ltd. and EFBP Associates, according to Colliers International, which represented the seller.

“Carlsbad is a market we know well and feel very strongly about,” said Ryan Smith, a principal at Peregrine who deemed the buy “a key strategic acquisition for our firm.”

Another big Carlsbad industrial deal took place in mid-March, as the first quarter drew to a close, when sporting goods retailer Callaway Golf Co. sold three industrial buildings it owns for $18.5 million, as part of a lease-back arrangement. According to CoStar Group, Callaway sold the three buildings — two on Pascal Court and one on Rutherford Road — to LBA Realty of Irvine. The buildings total 242,917 square feet.

According to a new report by the San Diego-based commercial brokerage firm Cassidy Turley BRE Commercial, the local industrial market in the first quarter saw its fifth consecutive quarterly decrease in countywide vacancy.

But those buildings have seen rising occupancy for four consecutive quarters, attracting tenants in sectors including biotech, telecommunications, property services and home improvement. “Companies are moving out of their home garages and back to some of those incubators,” Aberg said.

Local Hotels Continue to Book Improvements: Some big trophy hotels in San Diego have changed hands this year, and improving fundamentals for the hospitality industry have been cited as a key reason why large real estate investment trusts have gone on the hunt.

Recently released first-quarter performance data from Smith Travel Research Inc. show that local hotels are continuing the upward recovery swing that began in the second half of 2010.

For the first three months of 2011, hotel occupancy reached 65 percent, up 4.5 percent from a year ago. Occupancy in March was 70.2 percent.

San Diego County hotels tallied more than $416.6 million in revenue for the period, an increase of 12.3 percent from a year ago.

If a Tree Travels Out of the Forest …: If you recently saw a 30-foot-wide, 20-ton, three-story-high tree cruising down Interstate 5 toward San Diego, you were not hallucinating.

Sudberry officials said Civita’s first tree was slated to be planted on Arbor Day, April 29, after arriving on a special flat-bed truck with an escort from the California Highway Patrol. “We spent months looking for the right tree to be the first ‘resident’ of Civita,” said Marco Sessa, Sudberry’s senior vice president of residential land development.

The new tree is part of a central roundabout that will eventually greet visitors to the 230-acre walkable community of Civita, set to include homes, public parks, a civic center and amphitheater.

Convention Center Gets Green Honors: For the third time, the San Diego Convention Center has received the City of San Diego’s Recycler of the Year Award, part of a program recognizing businesses that implement successful waste reduction, reuse and recycling programs.

Among the 12 winners of the award were San Diego International Airport, the San Diego Zoo and several ecology-minded corporations with local facilities.

A “director’s” award went to 16 organizations, and San Diego Bayfront Hilton received a recycling partner award for joining the city in its on-site food composting program. Honors were bestowed April 21, the day before Earth Day, at the USS Midway Museum.