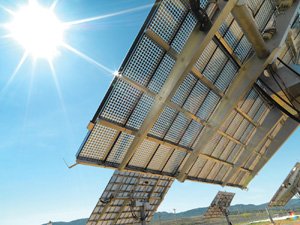 Concentrix Solar Inc., which has U.S. headquarters in La Jolla, plans to build a factory in the San Diego region, employing up to 450, to supply solar panels for an upcoming Imperial Valley energy project involving SDG&E.

Company description: Provider of technology components used in the energy and electronics industries.

The utility firm, a division of San Diego-based Sempra Energy, recently announced that it would work with Tenaska Solar Ventures of Nebraska to obtain solar-generated power from a facility being built by Tenaska in Imperial County, under a 25-year contract.

That facility will use solar panels to be produced by Concentrix Solar Inc., a division of France-based tech provider Soitec, which plans to build a new factory in the San Diego region.

Clark Crawford, general manager of business development for Concentrix’s North American operations, said the exact location of the plant will likely be finalized this summer, with construction to take about 18 months. The factory is expected to employ 450 at full capacity.

That will be a significant boost from the eight people currently employed at the company’s U.S. headquarters in La Jolla. Concentrix’s main global operations are based in Germany.

Crawford said the San Diego region was chosen for the factory for access to a trained, technology-oriented work force, and also to minimize transportation costs related to serving customers in its target markets.

“Most of our U.S. customers are in places like the Southwest, where you get access to large amounts of direct sunlight,” Crawford said.

Concentrix officials estimated that in addition to the 450 manufacturing jobs, the San Diego plant at full capacity will generate more than 1,000 indirect jobs in the region.

Nearly 300 construction jobs also are expected to be created in the Imperial Valley during the two-year construction of the power generation facility. The contract calls for up to 150 megawatts of solar energy to be generated at the Imperial Solar Energy Center West’s proposed 1,057-acre facility near El Centro.

That facility will connect with SDG&E’s Imperial Valley substation, and its renewable solar energy will be transmitted over the utility’s Sunrise Powerlink transmission line to serve its San Diego County customers. The transmission line is under construction and slated for completion in 2012.

The utility estimates that the Imperial Valley solar project will help prevent the release of 117,000 metric tons of greenhouse gas emissions into the air, the equivalent of taking 20,000 cars off the road locally.

James Avery, SDG&E’s senior vice president of power supply, said the utility is about two-thirds of the way toward reaching its goal, set in 2008, of obtaining at least a third of all its power from renewable sources.

Similar Projects Yet to Unfold

Negotiations are in progress with other corporate partners on similar alternative energy projects. “I’m confident we’ll be able to announce the details by the end of this year,” Avery said.

The San Diego Concentrix factory will produce proprietary concentrated photovoltaic panels and related equipment. In addition to supplying materials for the Imperial County power plant, company officials said the factory will be able to supply other utility-scale solar projects throughout the desert Southwest.

In a statement issued by SDG&E, Tenaska and Soitec, San Diego Mayor Jerry Sanders said the factory project serves as a model for how the shift toward clean energy can boost the region’s economy. “It creates skilled manufacturing jobs and builds our base of innovative companies,” Sanders said.