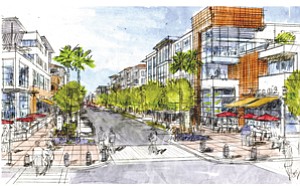 Dallas-based Stratford Land has joined Corky McMillin Cos. as an equity partner in the planned mixed-use Millenia development in Chula Vista.

Developers say the long-discussed Millenia, billed as a 210-acre “urban epicenter” of homes and commercial amenities in eastern Chula Vista, may now have the crucial element to push it forward — a new equity partner.

Stratford Land of Dallas has joined the project’s original developer, San Diego-based Corky McMillin Cos., as a partner in the mixed-use project. In various planning stages since 2004, the development will be built within the larger Otay Ranch community.

“They’re very well capitalized,” said McMillin project manager Todd Galarneau, referring to Stratford. “That’s going to allow us to get moving forward a little faster than if we had to apply for more loan financing.”

Galarneau said the project was fully entitled as of 2009, and the first homes could be completed by 2012 or 2013. Those would be followed long term by elements including shops and restaurants, offices and possibly hotels.

The companies are not disclosing financial terms of Stratford’s participation. When fully built out over the next several years, possibly with more developers joining in, Millenia is expected to represent an investment of nearly $4 billion.

Galarneau said detailed plans are still being worked out, but the McMillin-Stratford partnership plans to emphasize civic components, walkability and eco-sustainability, with employment elements to bolster the South County economy.

San Diego County homebuilders are gradually waking from a recession-induced construction slumber. According to the latest data from the Construction Industry Research Board, $58 million in local building permits were issued during the month of January for single-family projects.

Agencies Splitting Tab on Embarcadero Work: Officials have come to an agreement under which three local agencies will provide funding for the first phase of the long-delayed North Embarcadero makeover.

The initial downtown San Diego waterfront work is expected to cost $28.6 million. Under a plan approved Feb. 25 by the Board of Port Commissioners, it will be shared equally by the Port of San Diego and the City of San Diego Redevelopment Agency, acting through the Centre City Development Corp.

The arrangement required an amendment to the joint-powers agreement governing the Embarcadero visionary plan, allowing the port district to advance construction costs so the work can begin as soon as possible. The port can’t move ahead with the project without funding aid from the redevelopment agency.

A port statement said the district will repay the redevelopment agency for its share of advanced funds, possibly from the port’s general fund or from future rent received from the planned Lane Field commercial development.

The latest version of the first-phase Embarcadero plan, which includes new parks and promenades, will likely go before the California Coastal Commission at its April meeting in Santa Barbara.

Del Mar Hires Consultant on Fairgrounds Buy: No actual purchase is pending, since Gov. Jerry Brown doesn’t support it right now, but the city of Del Mar has taken another step in the direction of buying the local fairgrounds and famous racetrack from the state.

The City Council on Feb. 22 authorized the city manager to hire California Strategies LLC, a Sacramento-based lobbying firm with San Diego offices, for consulting related to the city’s controversial bid to purchase the fairgrounds property.

The bill for an approved one month of consulting will be $5,000. The city has the option of extending the contract up to an additional two months, which would take the tab to a maximum of $15,000.

According to its Web site, California Strategies’ staff boasts a high-powered stable of political veterans, including three former members of the state Assembly; an ex-member of the state Senate; former chiefs-of-staff to a mayor; a governor and U.S. Congress members; and aides to federal Cabinet agencies.

In a bid to calm critics, the city has also approved a setup, similar to a public trust with input from surrounding communities and government agencies that would guide future uses of the fairgrounds if Del Mar does take ownership.

The state Legislature is mulling a proposal allowing the city to buy the fairgrounds for approximately $120 million, but the governor, unlike his predecessor, does not currently back the sale of state properties to help balance the budget.

The year-end results, reported Feb. 23, reflect the period since April 28, 2010, the date of the firm’s initial public offering of common stock.

The REIT, which has offices in Rancho Bernardo, ended the year with $1.9 million in funds from operations, a supplemental measure used to gauge the performance of real estate portfolios. The company reported $4.5 million in adjusted funds from operations, accounting for factors including amortization and depreciation, which the company said surpassed analysts’ expectations.

Chief Executive Officer Gary Sabin noted that despite having the IPO in a “challenging environment,” the company in 2010 was able to use proceeds to acquire 24 properties in 15 states, for approximately $420 million.