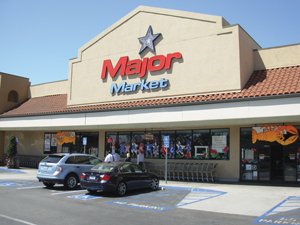 The Gerrity Group has purchased Felicita Town Center in Escondido for $30.1 million. Gerrity has formed a new venture with other private investors to acquire and operate centers throughout the western United States.

The center, built in 1990, was sold by Dallas-based investment firm Sarofim Realty Advisors, on behalf of owner Felicita Holdings LLC, and is anchored by Major Market, Rite Aid and Trader Joe’s.

Gerrity Group, led by retail center investment veteran William W. Gerrity, founder and former CEO of what is now called Terramar Retail Centers in Carlsbad, has formed a new venture with other investors to acquire and operate centers throughout the western United States. According to Cushman, the focus will be on assets in “mature submarkets” with favorable demographic profiles and “attractive supply/demand dynamics.”

Also in Escondido, the Mission Escondido Shopping Center was purchased by Carlsbad-based investment firm Capstone Advisors Inc. for $3.9 million, from a subsidiary of Kennedy Wilson Properties.

Alex Zikakis, Capstone’s president and CEO, said the company will invest $300,000 in a “much needed face lift” at the property, which is located off West Mission Avenue and is 70 percent leased. Tenants include United Cerebral Palsy, four restaurants, an Asian grocery store and several professional offices.

Zikakis said Capstone is on the lookout for well-located properties, like Mission Escondido, that have been negatively impacted by the economic downturn. “The center has a great infill location in Escondido’s downtown district and is home to a nice roster of tenants,” he said.

Improvements at the 40,000-square-foot center, built in 1985, will include exterior repainting, new signage and energy-efficiency upgrades.

One Hotel Planned, Another Upgraded: San Diego port district commissioners have approved concept plans for a 175-room, $30 million hotel on Harbor Island. It is being developed by locally based Sunroad Enterprises, which operates the nearby 600-slip Sunroad Resort Marina.

Port officials on June 14 approved the project 6-0, and it now goes to the California Coastal Commission, which will consider issues including the hotel’s labor situation. Labor organizers have opposed the project, and Sunroad and Unite Here were recently in talks over the union’s request that workers at the hotel be given the choice of whether to unionize.

In downtown San Diego, the Westin Gaslamp Quarter hotel recently completed extensive renovations to its 450 guest rooms and suites. The room makeovers are part of a larger $25 million renovation set to be finished in 2012, including changes to public areas.

Hotel representatives said this is among the first Westin properties nationwide to sport the new look, utilizing eco-friendly materials, natural wood and stone, and a neutral color palette creating a more soothing environment.

The Westin, at 910 Broadway Circle, is operated by Starwood Hotels & Resorts Worldwide Inc., and was purchased earlier this year for $110 million by Maryland-based Pebblebrook Hotel Trust.

For instance, San Diego-based Premier Food Concepts LLC announced plans to open a fifth location of its Luna Grill. The restaurant will debut in July at Eastlake Village Center, 2275 Otay Lakes Road in Chula Vista, following closely behind the opening of the fourth Luna Grill in San Diego’s Hillcrest area.

And on June 30, popular youth clothing retailer H&M plans to debut its fourth San Diego County store, at The Forum in Carlsbad.