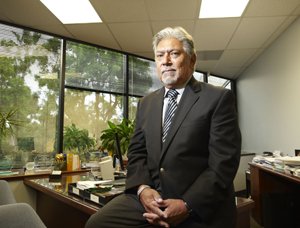 Steven Escoboza, president and chief executive officer of the Hospital Association of San Diego and Imperial Counties, said that many regulatory details need to be finalized to get a more clear picture of the CO-OPs’ program. Photo by Stephen Whalen.

There soon may be a lot more health care organizations in California trying to resemble Kaiser Permanente if the market embraces one of the lesser-known reforms outlined in the Affordable Care Act, which President Obama signed into law in March 2010.

The legislation calls for the establishment of heath cooperatives — officially called Consumer Operated and Oriented Plans, and often shortened to “CO-OPs” — which are nonprofit health insurance issuers governed by consumers that would offer health plans to individuals and small groups.

“CO-OPs represent a fundamental change in structure that will allow hospitals to create a not for profit insurance company and compete directly with Blue Cross, Humana, and all of the publicly traded HMOs,” said William Mohlenbrock of Del Mar, chairman and chief medical officer of health care consultancy Verras Ltd. “I consider it to be the most important advance I’ve seen in health care policy in many, many years.”

Last week, the Centers for Medicare & Medicaid Services, a unit of the U.S. Department of Health and Human Services, released highly anticipated details on what these cooperatives will entail and how health care organizations can qualify for some $3.8 billion in loans that will soon become available to help start up new health plans. Loans will only be made to private, nonprofit entities that demonstrate a high probability of becoming financially viable, according to the Centers for Medicare & Medicaid Services.

Several successful health insurance cooperatives currently exist around the country, covering nearly 2 million people, according to the Centers for Medicare & Medicaid Services. Two of the most often-cited cooperatives are HealthPartners in Minneapolis–Saint Paul and Group Health Cooperative in Seattle. Each serves more than 500,000 members, offering insurance and also providing health services by contracting with physician groups and either owning or contracting with hospitals and clinics.

The government also has looked to Kaiser Permanente, which is based in Oakland but has a large San Diego presence, as an example of a nonprofit delivery system with an affiliated health insurance plan.

A model such as Kaiser’s has many consumer benefits, said Mary Ann Barnes, senior vice president and executive director of Kaiser Permanente San Diego. “Our incentives are all aligned, so the focus is always on the patient,” Barnes said. Insurance costs also tend to be lower because the integrated model helps to “decrease variation across the system,” she said.

Kaiser, founded in 1945, has been transparent with its best practices so that other health care groups that want to create a similar model can succeed, Barnes said. “We believe there’s room in the marketplace for a lot of us,” she said. “We all should be joining together to improve the health of the community.”

Despite the funds that will be available to help CO-OPs emerge, there has been very little discussion in the San Diego hospital community about whether these plans will have a big impact on the health care landscape here, said Steven Escoboza, president and chief executive officer of the Hospital Association of San Diego and Imperial Counties, a nonprofit trade group.

Filling in the Blanks“That’s probably because the regulations haven’t been widely disseminated,” he said. In fact, the regulations are still not finalized; the Centers for Medicare & Medicaid Services is taking public comments until Sept. 16.

However, Escoboza said that through his involvement with the San Diego Regional Chamber of Commerce, he knows that employers are looking at every possible option to keep health insurance premiums down. If CO-OPs offer affordable rates, employers may “make a leap of faith” and enroll, he said.

Meanwhile, Escoboza said the health-reform topic with the most interest from local employers relates to the new state-based health insurance exchange, which must be up and running by 2014 under provisions of the Affordable Care Act. In September, California became the first in the nation to sign legislation to implement a health insurance exchange, which will be called the California Health Benefit Exchange.

Such exchanges are designed to bring new transparency to the market because they will allow consumers to compare all health plans based on price and quality. CO-OPs will be able to sell their insurance coverage through state exchanges just like other insurance plans.