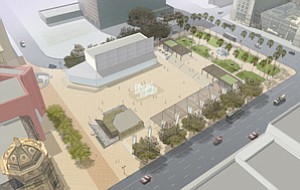 This, the Forum plan, is one of three design concepts put forward for a planned public square adjacent to Westfield Horton Plaza in downtown San Diego.

CCDC spokeswoman Michelle Ganon said about 75 people attended the latest review session, and planners generally have received positive feedback. The Cabrio Arch concept is inspired by the Spanish architecture found throughout San Diego; the Forum plan is modeled on the city’s grid layout; and Landform reflects the proximity to beaches and canyons.

The design team will incorporate the latest comments, with the next presentation expected in mid- to late July. In the works is a public-square-style park about the size of an entire city block, which officials expect will host more than 200 civic events and community celebrations annually.

The plan includes demolition of the 130,000-square-foot building that formerly housed the Robinsons-May department store at Broadway and Fourth Avenue. The renovation is being aided by about $8 million in CCDC funding, with Westfield to be responsible for demolition and maintenance costs at the park for 25 years.

City officials expect the 1.5-acre park to be completed by late 2013. As part of the Horton Plaza redevelopment, the CCDC’s executive board recently approved a request to bid construction for the renovation of the Lyceum Theatres with a construction budget of $1.96 million.

At the nearby Gaslamp Quarter, officials have proposed a nearly $1 million renovation of Gaslamp Square Park, at Fifth Avenue and L Street in one of downtown’s key business districts. The CCDC board has approved capital plans for enhancements including removing the existing “Dancing Waters” fountain, repaving the area with a solid brick pattern, and adding trees, benches and lighting.

Construction Activity Heading Up: Most local construction firms have yet to see their workloads return to those heady days before the recession. But the latest data from the Construction Industry Research Board, measuring building permit values for new projects, indicate that San Diego County is continuing a steady improvement in both residential and commercial construction.

In the first five months of 2011, building permits totaling $608.8 million were taken out for residential projects, including new construction, renovations and expansions. That was up 35 percent from the same period in 2010.

On the commercial side, the improvement was even more dramatic with permits reaching more than $482.9 million, for an 85 percent rise from a year ago. When the two categories are totaled, permits were pulled for more than $1 billion in construction projects from January to May, up 53 percent from the first five months of 2010.

Renovations Continue at Fashion Valley: A newly completed water feature near the Bloomingdale’s store is the latest sign that the another phase is under way in an ongoing $15 million renovation at Fashion Valley. The mall in San Diego’s Mission Valley is owned by Indiana-based Simon Property Group Inc., the nation’s largest shopping center operator.

According to Simon, the fountain is designed in the shape of an agave plant and holds roughly 1,570 gallons of water, continuously flowing over and circulating through the fountain. The fountain has a perimeter basin that doubles as a seating area and LED lighting that changes colors.