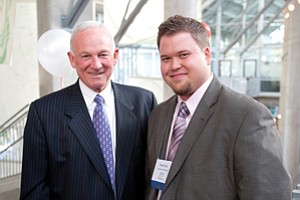 Barrio Logan College Institute celebrated its 15th anniversary on June 1 at The New Children’s Museum. The event raised $200,000 to support the BLCI programs. To date, 100 percent of BLCI graduating seniors have enrolled in colleges and universities throughout the country. The class of 2011 includes 13 graduating seniors, one of whom received a Gates Millennium scholarship and another received a QuestBridge scholarship. There were many acceptance letters to colleges and universities. “I was overwhelmed to see how much support and love were directed toward the kids,” said BLCI Executive Director Jose Cruz … Voices for Children received a $15,000 grant from Impact Giving to support VFC’s Infants and Toddlers program and the critical needs of young foster children, from newborns to age 5. This program addresses a critical, urgent community need and will transform the lives of these children … Carlsbad Educational Foundation received $60,000 from Legoland California during the 8th annual Celebrate Carlsbad Day event held at Legoland on May 14. The event raised a total of $94,000 to help fund weekly music instruction for elementary school students in the district during the 2011-2012 school year … Employees of NRG Energy volunteered to help various charitable organizations in their communities across the country. In Carlsbad, employees performed indoor and outdoor maintenance projects at the Boys & Girls Clubs of Carlsbad … Words Alive selected 13 people from six San Diego County Juvenile Court and Community Schools as the 2011 Words Alive Westreich Scholarship recipients. The awards range from $500 to $5,000 for the 2011-2012 academic year. The scholarship funds are not restricted to books, tuition or educational supplies … Lisa McGinnis and her husband, Roger, of La Mesa, received the 10 News Leadership Award. The McGinnis’ initiated a foundation in memory of their son, Kelly, who died in a car accident in 2005. He struggled with learning disorders until finding success in Career and Technical Education programs. The program was the inspiration he needed to undertake his academic classes and graduate in 2005. The foundation donates funds to support CTE programs in the San Diego Unified District … As part of Coca-Cola’s 125th anniversary celebration, the Coca-Cola Foundation has given $50,000 to the Barrio Station to support its youth development program and create a leadership and mentoring curriculum. This grant is part of $6 million given by the foundation during the first quarter of 2011 to organizations that are making a difference in the areas of active, healthy living, education and youth development … San Diego Commission for Arts and Culture and The San Diego Foundation have partnered on a “Survive and Thrive” initiative to encourage support of artistic programs. A $45,000 matching grant from the National Endowment for the Arts helps support the wrap of an MTS Trolley car with arts and culture images and messaging. The trolley wrap was featured during the Annual Americans for the Arts Convention June 16-18 … Reality Changers held its 11th Annual Stars Under the Stars scholarship ceremony and fundraiser on June 11. San Diego State University President Stephen Weber was the special honoree at the event. In addition, 51 inner-city students who plan to attend college across the country were honored. All of these students will be the first members of their family to attend college … HeadNorth hosted its 6th Annual Golf Invitational on June 12 at the Crosby in Rancho Santa Fe. The event raised $258,000 for essential support and resources to people affected by a spinal cord injury. New to this year’s event was a Helicopter Golf Ball Drop on the 18th hole. Raffle tickets were sold to raise a total of $8,000.