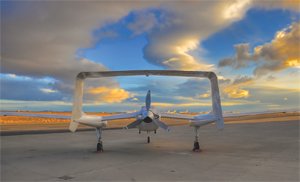 Northrop Grumman Corp.’s Firebird, seen from the back, shows off its rear-mounted propeller and its unique tail configuration.

Key factors for success: Access to resources as a Fortune 100 corporation; acquisition of unmanned aircraft builder Teledyne Ryan in 1999.

Investors: Owned by the Blue family and an affiliate of General Atomics.

Key factors for success: Private ownership, which makes the company flexible and discreet; it has an ability to predict what the customer will want.

Poway-based General Atomics Aeronautical Systems Inc. has the market to itself when it comes to producing a certain type of military aircraft.

Big Northrop Grumman Corp. wants in. The market is worth billions. Northrop is willing to spend some shareholder money to get onto that part of the playing field.

Los Angeles-based Northrop builds military aircraft of all shapes and sizes. However, it doesn’t make unmanned planes that fly at midlevel altitudes and can stay in the air for more than 24 hours. The so-called “male” market — that’s short for medium altitude, long endurance — belongs to GA-ASI, analysts say.

Such unmanned aircraft can spy on targets and, in some cases, deliver air-to-ground missiles. GA’s Predator specializes in those two tasks. By now, there are several types of Predators, including the advanced Air Force model called the Reaper, and an Army version called Grey Eagle.

A Northrop spokesman confirmed the company has put millions of dollars into research and development to enter the medium-altitude market. The result is an aircraft called Firebird.

Northrop engineers came up with the Firebird concept in February 2009. The aircraft’s first flight was in February 2010, said Rick Crooks, Northrop’s program manager for Firebird. The builder publicly unveiled the aircraft in May and reported success during a military exercise that stretched from May to June at Fort Huachuca, Ariz.

A good portion of the development work happened in San Diego. The airframe came together at Mojave-based Scaled Composites, the company that built the first privately funded spacecraft, SpaceShipOne. Scaled Composites has been part of Northrop since 2007.

Northrop introduced its prototype one year after military leaders’ 2010 decision to increase the number of combat air patrols from 50 to 70 — that is the number of unmanned vehicles circling over contested territory at any one time.

To fill that need, the Air Force is currently building its fleet of Predator B aircraft, also called the Reaper. Between this year and 2016, the Air Force plans to buy 300, or 50 per year, said Ron Stearns, an analyst with Kirkland, Wash.-based G2 Solutions.

A June report from the Congressional Budget Office estimates the Air Force will spend $8.9 billion on Reaper between 2011 and 2016. Spending on a follow-up model to the Reaper will exceed $1 billion yearly between 2017 and 2020, the report said. Total spending will be $13.07 billion.

(The same report says Army, Air Force, Navy and Marines will likely spend $36.9 billion on medium-sized and large unmanned aircraft between 2011 and 2020.)

So far, Northrop has only built a single Firebird.

Firebird has two selling points that GA-ASI can’t claim with its Predator family. First, the aircraft has a seat for a pilot, who can operate it when the situation warrants. One of those situations might be a flight across the United States. The Federal Aviation Administration bans unmanned aircraft in most parts of the country. As a result, drones have to be disassembled and transported by other aircraft.

Finnegan said he sees potential for cost savings with a pilot, as well as more training opportunities.

Firebird also has a “plug and play” aspect to its electronics. Northrop spokesman Warren Comer said introducing new electronics to the aircraft is like putting a memory stick into a computer: “it’s automatically recognized without needing to load new software.”

Northrop said that during the recent Arizona exercise, the Firebird used three optical sensors at the same time — plus a fourth electronics payload. It’s a capability the military wants, and it’s available now, Northrop said in a news release.

What’s more, the Firebird can easily switch tasks, according to its builder. For example, it could be working as a communications relay station, and commanders might decide it would serve better as an electronic warfare aircraft. Commanders could make the transition midflight, Stearns said.

GA’s Predator variants have hard points for carrying a complement of 5-foot-long Hellfire missiles, a product of Lockheed Martin Corp. Stearns said he sees the GA-ASI Reaper as a platform for delivering “mass firepower.”

Stearns said Northrop’s Firebird could possibly be an entrant to the competition for an aircraft that occupies an intermediate space between GA-ASI’s Predator/Reaper family and the high-altitude Global Hawk. Global Hawk is a Northrop product that might be the eventual replacement for the U-2 spy plane.

The Defense Department calls this intermediate aircraft concept “MQ-SX.” It’s based on existing aircraft systems, the Congressional Budget Office says, though it is “more capable than the Predator class in speed and altitude and less capable than the Global Hawk class.”

The plain-vanilla Predator can reach 25,000 feet and the Army variant can reach 29,000 feet, according to the GA-ASI website. Commercial airliners fly at about 30,000 feet.

GA’s souped-up Reaper can fly as high as 50,000 feet, according to the Air Force.

The Congressional Budget Office report authors said the MQ-SX aircraft would probably be jet- powered and a little stealthier than Predators and Global Hawks. A highly stealthy design, authors continued, would come with an increase in costs.