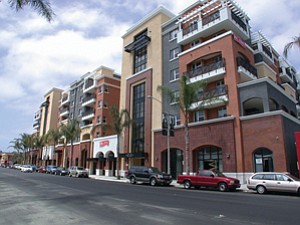 Retail space is 100 percent leased at the mixed-use Atlas development in Hillcrest.

The seller was Raleigh LP and the buyer was John A. Cameron. James Renner and Robbie Cornell of Inland Pacific Commercial Properties represented the buyers and the sellers. The building is fully leased to HDS White Cap Construction Supply. The property was purchased as an investment.

Located at 3650 Fifth Ave. in Hillcrest, the project consists of 140 upscale condominium units ranging from one to three bedrooms and 719 to 1,576 square feet. The property also includes ground-floor retail space along Fifth Avenue. All residential condominiums have been sold and all commercial space has been leased.

“Atlas is the latest ground-up, mixed-use retail/residential development built within the busy Hillcrest area and one of the few to be 100 percent leased,” said Chris Rink of Cassidy Turley BRE Commercial, who, along with Randee Stratton of the same company represented the landlord, D.R. Horton, as well as Pappalecco, Osteria Origano and Beauty By Dolly. Pure Barre was represented by Joe Anderson of Cassidy Turley BRE Commercial’s Carlsbad office.

David Temko, an investment specialist in Marcus & Millichap’s San Diego office, had the exclusive listing to market the property on behalf of the seller, a private investor.

The warehouse building was built in 1986 on a 1-acre lot located immediately south of Brown Field Municipal Airport in Otay Mesa.

Cindy Gomper Graves of the South County Economic Development Council assisted Bow Tape with facilitating the opening of this new location in the City of San Diego. The Otay Mesa facility is the company’s first U.S. factory. Established in South Korea in 1986, Bow Tape manufactures and distributes a variety of adhesive tapes.

Puma AG purchased Cobra Golf last May, combining the Cobra Golf and Puma Golf brands to create the new company, Cobra-Puma Golf. The deal brought together Puma Golf’s inventive footwear, apparel and accessory designs with Cobra Golf’s advanced equipment, innovation and performance to position Cobra-Puma as a company for golfers of all abilities, attitudes and styles. The two brands will continue to be developed separately, while maximizing resources and collaborating on operations, research, design and marketing.

The design concept for the remodeled space incorporates a sleek, minimalist theme that reflects the company’s progressiveness while providing a neutral background for the vibrant, highly stylized brands to be displayed throughout the facility. White, gray and chrome furnishings will create a modern aesthetic, while Espresso-stained wood accents will add a warm, elegant appeal. Custom lighting and finishes will enhance the overall contemporary look and complement the Cobra-Puma brand.

Tenant improvement construction begins this month, with completion targeted for this August.

San Diego-based MPE Consulting Inc. is the electrical engineer and OfficePlanIt of San Diego is the furniture vendor. San Diego-based Reno Contracting is the general contractor.

The lease renewal value is 12 percent below the previous rate. The property is owned by HCP Inc.

The lease brings the 69,125-square-foot building to 100 percent occupied.