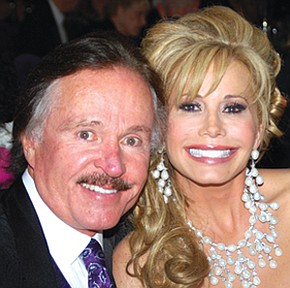 Craig and Joyce Grosvenor were chairs of the San Diego Symphony’s Opus 2010 Centennial Gala at The US Grant hotel.

San Diego Symphony Opus 2010 Centennial Gala was held Dec. 2 at The US Grant hotel, the site of the symphony’s first performance 100 years ago. Joyce and Craig Grosvenor chaired the gala, which raised $400,000 to support the symphony’s education and outreach program. Special guest world-renowned cellist Yo-Yo Ma performed at the Balboa Theatre courtesy of Tanya and Charles Brandes. US Bank was acknowledged as the symphony’s Centennial Season Sponsor. Other sponsors included Bridgepoint Education, Sempra Energy, Sycuan Band of the Kumeyaay Nation and Torrey Pines Bank … The San Diego Museum of Man has been awarded affiliate status by the Smithsonian. “Our goal at SDMoM is to increase and diffuse knowledge, which perfectly aligns with what the Smithsonian has accomplished for 150 years. This is not only an exciting development for SDMoM, but also for all of Balboa Park,” said Executive Director Dr. Micah Parzen … The Academies for Social Entrepreneurship in partnership with NP Strategies announced the winners of the Social Enterprise Academy and Venture Competition at a symposium held at the University of San Diego on Dec. 8. San Diego Futures Foundation was awarded $2,500 and a marketing services package valued at $12,500. Shakti Rising, known for transformational educational programs that are designed to empower young women, won the “Audience Favorite” prize of $500 … The Salvation Army received a $30,000 grant from the Waitt Foundation to help support the 2010 Food Drive. The need for food donations was at an all-time high last year and this grant helped provide food to qualified recipients throughout San Diego County … The San Diego Center for Children received several year-end contributions to help support the center’s intensive reading improvement program for special needs children. AT&T contributed $65,000; Bank of America donated $10,000; The Galinson Family Foundation donated $10,000; $7,500 from Sempra; $5,000 from AimLoan, $2,500 from the Sycuan Band of the Kumeyaay Nation, and $2,000 from the Price Family Charitable Fund … The Verizon Foundation has given a $9,950 grant to Center for Community Solutions which is targeted for use in a project called “Connections,” designed to provide education to prevent the spread of domestic violence and sexual assault. The grant will support a prevention educator, who will implement the Connections’ curriculum … Neighborhood House Association’s Senior Service Center received donations from Sempra Energy totaling $12,500. A $10,000 grant was given in addition to the Sempra Energy Foundation donating $2,500 from their Season of Giving program as well as distributing gift baskets to homebound seniors in the program. Developmental Services Continuum also received a $1,000 contribution from the Sempra Energy Foundation Season of Giving program. The money is used to purchase gifts for individuals served by DSC who do not have families … Holly Green, managing director and chief executive officer of The Human Factor Inc., was selected as the Outstanding Business Leader for 2010 by the Center for Leadership Innovation and Mentorship Building at Cal State San Marcos. Green was recognized for 20 years of executive level and operations experience. The award was presented at the College of Business Administration Senior Experience Trade Show at the California Center for the Arts, Escondido on Dec. 16 … The Performing Arts Program was held at The Neuroscience Institute in La Jolla on Dec. 18. The Feeding the Soul Foundation held a benefit concert hosted by San Diego musician Bushwalla and co-host Grammy Award-winning artist Jason Mraz. The $10,500 raised will go to the Lewy Body Dementia Association, which supports sufferers of the Parkinson’s-like disease. Sponsors and contributors included Olive PR Solutions, Jitters Coffee Pub, Engel & Voekers, Redfearn & Associates and Pedro’s Tacos.