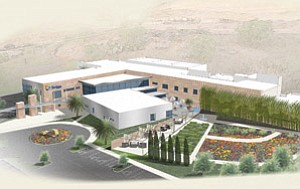 Construction is under way on the Scripps Proton Therapy Center in Mira Mesa.

San Diego — The battle for future proton therapy market share could shape up to be a highly competitive undertaking in the local health care economy if two projects come to fruition.

Interest and activity in proton center development is accelerating in San Diego as evidenced by the construction under way in Mira Mesa of the $200 million Scripps Proton Therapy Center, a collaboration among Scripps Health, Scripps Clinic Medical Group and Advanced Particle Therapy LLC.

The UC San Diego Health System said in October that it is planning to build a proton treatment and research center on university property near Moores UCSD Cancer Center.

The health system said it has an agreement (in the works since 2007) with Proton Health Partners LLC to plan, develop and operate the proposed UC San Diego Proton Therapy and Research Center, estimated to cost $205 million. Proton Health Chief Executive Officer Neil Fox, the funding partner in the venture, said he’s still securing private backing for the project.

At the forefront of both these efforts is the goal to launch for-profit proton therapy enterprises, which have an established history of reimbursement by Medicare and private health care payers. A non-invasive treatment, proton beam therapy is usually performed on an outpatient basis and is considered most effective on solid, deep-seated tumors that are localized and have not spread to distant parts of the body, according to Dr. Arno J. Mundt, professor and chairman of the UCSD Department of Radiation Oncology.

Across town, Scripps isn’t putting any upfront cash into its project, but is acting as the medical partner in the venture. The health system will operate the facility under its corporate name and hire the staff to run the facility, said Chris Van Gorder, president and CEO of the nonprofit.

The cancer-fighting benefits of the center, with its 8-foot-thick walls, will be “profound,” asserted Van Gorder, who estimated that Scripps will have 120 of its 13,000-plus local employees working at the center.

Traditional radiation oncology programs will continue at other Scripps facilities. “But for certain kinds of cancer, proton beam is the best tool in the toolbox,” said Van Gorder, whose organization reports annual revenue of $2.3 billion.

The center, which broke ground in late summer of 2010, is expected to be open for patient care by spring 2013. “We had 70 truckloads at the site recently pouring concrete,” said Jeff Bordok, CEO of Advanced Particle Therapy, who said partnering with a collaborator like Scripps was seven years in the planning.

Bordok said the funding is comprised of 35 percent equity and 65 percent debt.

The construction of two local proton centers may have the appearance of an “economic stimulus package,” said Len Arzt, executive director of the National Association for Proton Therapy, a nonprofit that promotes the clinical benefits of proton beam radiation therapy.

Arzt said he’s slightly skeptical that having two centers in one market will pencil out economically.