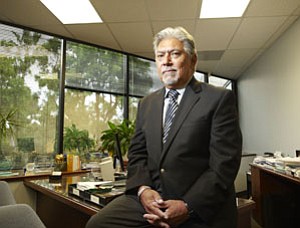 Steven Escoboza, president and CEO of the Hospital Association of San Diego and Imperial Counties, says reimbursement cuts by the government will reduce revenues for hospitals by tens of millions of dollars in the next five to 10 years. Photo by Stephen Whalen.

Overhauling the nation’s health care system will cause reductions in revenues — in the form of reimbursement cuts by the government and insurers likely to reduce payments to providers — for the county’s major health care organizations, local executives say.

But despite the challenges, the business of health care will remain a potent driver in the local economy, with an estimated economic impact of $9 billion in 2011, forecasts Kelly Cunningham, an economist and senior fellow for the National University System Institute for Policy Research.

Citing the most recent numbers compiled by the U.S. Department of Commerce’s Bureau of Economic Analysis, health care services, including hospitals and nursing homes, generated nearly $9 billion in the region in 2008.

“The multiplier effect that comes from that number is nearly $12 billion, which is a good chunk of economic (activity) in the region,” said Cunningham.

As health care dollars trickle through the economy thanks to local industry payrolls and the purchasing of goods and services, San Diego’s hospitals and doctors are looking for savings and other ways of streamlining business operations.

Health care industry analyst Nathan Kaufman says providers and payers must work closer together than ever before.

“The smart money is on (developing) models of consolidation and clinical integration in 2011 and beyond,” said Kaufman, managing director of Kaufman Strategic Advisors LLC in San Diego.

Hospitals already are feeling the pinch from the reduction in Medicare and state Medicaid funding, which can be the single largest revenue sources for hospitals, as much as 50 percent, says Kaufman.

Most of the larger nonprofit hospital systems will be able to weather these types of cuts by tapping their reserves, and many are likely to implement services and medical products that shift costs to commercial payers, says Kaufman, referring to proton beam therapy programs being envisioned by both Scripps Health and the UC San Diego Health System.

Effective Oct. 1, hospitals were hit with a 0.4 percent reduction in inpatient Medicare reimbursement rates, says Steven Escoboza, president and chief executive officer of the Hospital Association of San Diego and Imperial Counties. The cut is on top of reductions in state Medicaid reimbursement that took effect July 1.

“We would expect (the impact) to be tens of millions of dollars over the next five to 10 years,” said Escoboza, whose trade group represents 35 hospital systems.

As part of the federal reform package, hospitals said they would help defray the costs of health care legislation by agreeing to contribute $155 billion over 10 years, largely by accepting lower payments under the Medicare program for older Americans.

Eventually, health care providers anticipate that the newly insured will more than make up for the losses, since 32 million Americans are expected to be in the system by 2014. There are about a half-million uninsured people in San Diego, says Kaufman.

For local hospitals, greater attention this year will be focused on reducing expenses, but working hard not to cut staff, he predicts.

Chris Van Gorder, president and CEO of Scripps Health, estimates that the health care system is looking at a 30 percent reduction in the Medicare reimbursement stream between now and 2019.

He says the organization, which reports $1.8 billion in annual revenue on its Web site, has initiated a modified hiring freeze to offset labor costs. One approach is avoiding the costly hiring that comes from retaining agency nurses and other contract health care professionals.

Insurance companies will continue to press hard this year with hospitals and physician groups on ways to reduce costs and cut payments, Kaufman says.

Despite the loss of Medicare dollars and money from insurers, the region’s hospitals are still investing in construction projects.

Scripps is planning to dramatically expand its La Jolla hospital campus at a cost of $2 billion in the span of 25 years. It plans to break ground this year on a $398 million, eight-story, 383,000-square-foot hospital tower on the campus of Scripps Memorial Hospital La Jolla.

Palomar Pomerado Health says work is more than 80 percent complete on the 11-story Palomar Medical Center West in Escondido. The $900 million-plus hospital is set to open in 2012 with about 300 rooms.

While the organization didn’t provide a dollar value for the work it is planning in 2011, Sharp HealthCare will be busy with projects of its own.

Sharp, which reports annual net revenue of about $2 billion on its Web site, is working on a comprehensive cancer center at Chula Vista Medical Center; renovations at Grossmont Hospital’s East Tower and Coronado Hospital’s physical therapy center; expansion of the neonatal intensive care unit at Mary Birch Hospital for Women and Newborns; and a seventh-floor build-out at Sharp Memorial Hospital that will add 32 beds.

“Health care employment still is one of the few areas of the economy that has continued to see modest expansion,” said Reaser.