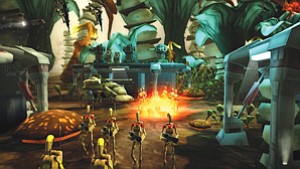 Sony Online Entertainment produces a variety of video games for gaming consoles, hand-held devices and computers, such as ‘The Clone Wars’ series depicted above.

Jim McArthur, vice president of marketing and sales solutions for Digitaria Interactive Inc., says 2011 is going to be an exciting year for San Diego County’s computer gaming and software industry.

McArthur, 37, started out on the creative side of computer gaming. He describes himself as “a hard-core gamer” who has followed the trends since he was a child.

“Games are all kind of the same mechanism,” he said. “If you are going to play a console game, there is a defined train of thought. It is the same with computers and mobile devices. Each has its strengths. In 2011, all of them are going to come closer together.”

The industry is moving toward multipurpose devices that allow consumers to do a wide variety of things, such as play games, download music and watch television, he explained. He noted that the Xbox 360 video game console by Microsoft already allows players to compete online and download arcade games, game demonstrations, trailers, television shows, music and motion pictures.

“It is not just about the game, it is about the hardware itself,” McArthur said. “You can get Netflix through the box. You can access video content, audio content, all through a single interface. In 2011, you will see the blending of the form. It will be a little more seamless.”

Many people who think they have kept up with evolving computer technologies will find that they have just scratched the surface, McArthur said. Gradually, gaming tools will begin to replace other electronic devices.

“Your video game console will begin to kill your computer, the cell phone and your television as they exist today,” he said. “They will be morphed into a single pivot point in your home.”

“That plays perfectly into the new tablets and Web pads,” Moore said. “They are really great gaming platforms. Gaming on smart phones is doable.”

If you are looking for the person with the next big gaming idea in San Diego, they could be anywhere, said McArthur. That is because the industry attracts many talented hobbyists from other professions who develop games in their spare time. Some do it for money while others do it for fun.

“There are many talented people, some who work out of their garage,” he said. “There are tons of companies starting up. Game development crosses over so many disciplines. People do it because they enjoy it, not because it is a job.”

He said companies such as Rockstar Games are developing the largest Hollywood-style videos. “You have companies like us that are putting together cool snackable games” on a smaller scale, he said.

“You are playing with hundreds or thousands of people online at any given time,” Shanks said. “It makes for a pretty compelling entertainment experience. Not only do you solve the traditional puzzles and obstacles but you also are interacting with real people.

“The whole industry is moving toward this type of game,” he said. “You will see more and more MMO releases and a lot of the classic games that will start showing more and more aspects of MMOs. The line is blurring at this point.”

One of the 2011 products Shanks is most excited about is his company’s DC Universe, a game that incorporates characters from DC Comics, the home of Superman and Batman.

“For the first time we are taking the whole universe of DC, all of the comics of 80 years,” he said. “We are pulling up all the characters and settings and we are creating a virtual world. The participants create their own hero or villain and exist in this world. We have worked very closely with DC.”

Emmet Pierce is a freelance writer for the San Diego Business Journal.