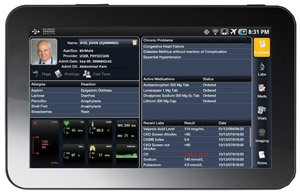 Palomar Pomerado Health, in a partnership with Cisco Systems, is developing a wireless communications system to allow physicians to monitor their patients’ health on smart phones.

Chairman of the board: Theodore E. Kleiter.

Come this fall, doctors on the go can be doctors in the know — at least in North County.

Palomar Pomerado Health, in a partnership with Silicon Valley technology giant Cisco Systems Inc., is developing a wireless communications system to allow physicians to keep track of their patients on smart phones.

The system, dubbed MIAA, or medical information anytime, anywhere, is now in the early pilot stages. Along with Cisco, PPH demonstrated MIAA at the annual Healthcare Information and Management Systems Society gathering Feb. 21 in Orlando, Fla.

MIAA feeds a patient’s vital information, such as blood pressure, heart rates and other signs, to doctors even when they can’t be at bedside.

The data pops up on doctors’ mobile devices, so they’re able to make treatment decisions when they can’t see the patients in person.

MIAA uses Google’s Android operating system, which is found on tens of millions of telephone devices and those new computing pads.

PPH and Cisco are working with San Diego-based startup Sotera Wireless Inc., which is awaiting U.S. Food and Drug Administration approval for a portable device that monitors and relays vital signs to remote devices, such as smart phones.

“Our goal will be to spin off (MIAA) as a separate company,” said Andy Hoang, spokesman for PPH, which operates Palomar Medical Center and Pomerado Hospital in North County. “We will be looking for professional investors to come in. There is nothing out there like this.”

Kanter said of PPH’s 800 doctors on staff, 250 work directly with patients in the hospital and clinics, and would be the first to use MIAA once deployed.

The technology does not require regulatory approval, and has cost $250,000 to develop to date, half funded by Cisco. PPH’s share came from funds set aside by the board to develop innovate approaches to health care delivery.

Hoang and Kanter noted that a big hurdle will be getting other hospitals to adopt the technology, so that doctors are not limited to PPH and its affiliates.

He noted one challenge in pushing out the technology to other systems is the glacierlike speed in making changes in how medicine is practiced.

Kanter said he hopes to work with Oakland-based Kaiser Permanente, which claims to have a half-million members in San Diego County.

Kaiser has pioneered the use of electronic medical recordkeeping with the help of private vendor Epic Systems Corp., and claims to have implemented the world’s largest electronic health record systems with 8.6 million patient records.

Kanter said Palomar Pomerado Health is the only U.S. hospital system that’s developing its own software to monitor patients remotely, though a number of companies are working on various components of delivering patient data wirelessly.

Big Step on a Long Path

“I think it is a fabulous idea,” said Gehring. “There is no downside to it.”

Dr. Eric Topol, who is the wireless expert at Scripps Health, one of the largest health care providers in the county, said: “This is one step along a long path of what we need. It certainly sounds like a nice application where they can look at a lot of data” while away from the patient.

But he cautioned that real-time delivery of such information as vital signs isn’t quite ready for daily use.

Topol said he also sees challenges in protecting patient privacy and in having a computer system powerful enough to process the information needed to make the app work.

“But I applaud them for pushing the envelope on this,” he said. “It’s a big step forward.”