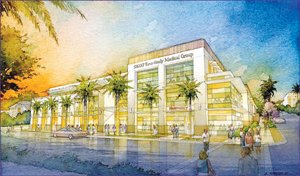 Chair of the board: Dede Alpert.

Mission of organization: To improve the health of those served with a commitment to excellence. The goal is to offer quality care and programs that set community standards, exceed patients’ expectations and are provided in a caring, convenient, cost-effective and accessible manner.

Sharp Rees-Stealy Medical Group plans to break ground this week on the first green medical office in San Diego, replacing its 85-year-old facility across the street at the corner of Grape Street and Fourth Avenue downtown.

The design-build team is seeking a Gold designation from the U.S. Green Building Council’s Leadership in Energy and Environmental Design, LEED, program for new construction.

The $38 million project will likely be financed from the nonprofit’s capital budgets, loans and the eventual sale of the old property, said Pat Nemeth, vice president of facilities at Sharp HealthCare. The anticipated move-in date is September 2012.

The facility was due for an upgrade, said Steven Escoboza, president and chief executive officer of the Hospital Association of San Diego and Imperial Counties.

“There are several social service programs nearby, so many seniors are programmed in that area and access is essential,” Escoboza said.

The outpatient facility will feature a pharmacy, optical shop and physical therapy on the first floor; urgent care, occupational care and radiology on the second floor; and primary and specialty practices on the third floor.

Sharp asked architects at AVRP Studios to design the building without the removal of a 100-year-old Moreton Bay fig tree planted by famed horticulturist Kate Sessions.

“We have embraced that wellness tree into the center of the design,” Nemeth said. The tree is three stories and sits on Grape Street adjacent to the new medical center.

Although this is the first green medical office for San Diego, other local medical buildings are in the LEED pipeline, such as a 146,000-square-foot Veterans Affairs facility on North Road and a $9.75 million Euclid Family Health Center expected to break ground in late March.

The health care sector has seen the largest growth in green construction during the past two years, according to McGraw-Hill Construction’s Green Outlook 2011. The report estimates that 35 percent to 40 percent of health care construction in the U.S. is green, equating to an $8 billion to $9 billion market — double that of 2008.

In November, the U.S. Green Building Council approved LEED guidelines for health care. By summer, acute-care facilities — hospitals and long-term care facilities, among others — will be required to be registered under health care guidelines and not new construction. Medical offices will have the option to choose either.

“This is radiology light,” Nemeth said. “There isn’t an MRI machine in this building.”

“Older health care projects chasing LEED would pick things that didn’t make sense for health care,” said Guttmann, a principal with Guttmann & Blaevoet in San Francisco. For example, LEED-NC, or new construction, has a credit for increased ventilation. This credit doesn’t exist for the new health care designation because it’s already required for some health care facilities in standard code.

Guttmann and other experts say energy consumption is the biggest challenge in building and operating green health care facilities. These buildings have the second-highest energy use behind food service, he said.

Sharp has partnered with San Diego Gas & Electric Co. to install a photovoltaic system on the roof and adjacent 300-car parking structure. The estimated 75-kilowatt system will feed into the grid, not the building, Nemeth said.

Stephanie Flores is a freelance writer for the San Diego Business Journal.