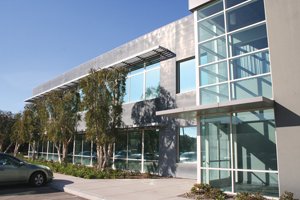 Cushman & Wakefield facilitated the sale of this 17,792-square-foot Class A office building in Kearny Mesa to Quake Global in a $4.1 million deal.

The San Diego office of Cushman & Wakefield Inc. facilitated the close of a complex $4.1 million transaction that included the assumption of a $3.7 million commercial-backed security loan for a 17,792-square-foot Class A office building in the Kearny Mesa Spectrum area of San Diego. The buyer was Quake Global Inc.

“This transaction is indicative of the types of commercial sales we will be seeing many more of in coming months, in which existing CMBS loans are assumed in order to avoid significant prepayment penalties — in this particular case, 35 percent of the loan’s value,” said Deborah Hunkeler, a broker with Cushman & Wakefield who, along with Jay Arnett, navigated the sale’s closing.

Built in 2001, the property at 4933 Paramount Drive in San Diego was sold in 2007 for $5.95 million to the Homer and Hallum Trust as a sale leaseback investment property.  However, due to the current state of the market, the property was re-marketed and sold to owner-user Quake Global.

“Our efforts also included negotiating the early lease termination of two tenants,” said Hunkeler. “The result was a win-win for the seller and buyer, the latter of which now owns a premier corporate headquarters facility in one of the county’s most preferred submarkets.”

Integrated DNA Technologies is a supplier of custom oligonucleotides and a developer of new biotechnologies. BioMed Realty Trust is a real estate investment trust that acquires, develops, owns and operates laboratory and office space throughout the core U.S. life science markets.

“A.O. Reed & Co is pleased that its headquarters has received the EPA’s Energy Star in recognition of our energy efficiency efforts,” said Steve Andrade, A.O. Reed & Co. president and CEO. “As a nationally recognized leading mechanical and energy contractor in Southern California, we thought it was imperative to undergo a major retrofit prior to recommending our clients do the same. We retrofitted our HVAC systems, lighting systems, installed an energy management system, a cool roof, added 140kw photo-voltaic array to generate 67 percent of our electrical consumption, retrofitted our plumbing fixtures, and made a firm commitment to changing our culture while keeping our nearly 100-year-old traditions intact.”

“Comprehensive energy savings solutions and leveraging SDG&E incentives is now part of their culture,” said Hal Snyder, vice president of customer solutions for SDG&E, during the awards luncheon. “A.O. Reed & Co. walked the talk by investing in substantial sustainable energy saving retrofits to their own buildings.”

Coldwell Banker Commercial Almar Group represented both the landlord and the tenant in a three-year lease agreement with Intravas Inc. for 11,571 square feet in an office building located at 5770 Armada Drive in the Carlsbad Ranch Business Park. This transaction represents one of the largest new office lease deals done in Carlsbad in the past 12 months.

“A number of well-known companies are headquartered at the Carlsbad Ranch Business Park,” said King. “This is a prime location that should contribute to the long-term success of Intravas Inc.”

Tenants of the low-rise buildings along Armada Drive and Fleet Street include the National Association of Music Merchants, Jenny Craig and NRG West, a unit of NRG Energy Inc. The office park has easy access to Interstate 5 via Palomar Road and is adjacent to Legoland, a theme park constructed with Lego bricks.

The new Career Technology Center at San Diego City College has been awarded Leadership in Energy and Environmental Design Gold certification for sustainable and green design by the U.S. Green Building Council.

The USGBC is an organization that promotes sustainable, efficient, and healthy building design and operation. The Career Technology Center, which was completed in May, is the college district’s seventh facility to be LEED certified and fifth to achieve a LEED Gold designation.

“This is a great accomplishment for our district,” said Dr. Constance Carroll, San Diego Community College District chancellor. “Not only have we provided a phenomenal new building in which people will train for in-demand jobs, but one that is environmentally excellent as well.”

The San Diego office of audit, tax and advisory firm KPMG LLP has been certified in Leadership in Energy and Environmental Design. The firm’s San Diego office has achieved the U.S. Green Building Council’s Silver LEED-CI certification for commercial interiors.

“Achieving the certification was the second step in a plan that began when we selected this LEED Gold building that was in line with KPMG’s firmwide ‘green’ initiative to reduce its carbon footprint,” said David Down, KPMG San Diego office managing partner.

“Even the position of photocopiers is calibrated to use the least amount of energy,” said Stephanie Renick, KPMG San Diego operations services manager. “And most of the construction waste was diverted from landfills for recycling.”

“In the heart of the new La Jolla Commons financial district, we are close to public transportation, and we also provide bike lockers to offer alternative means of commuting,” he said.

In 2009, KPMG signed a lease for approximately 28,710 square feet of office space in La Jolla Commons and relocated to the 13-story, 300,000-square-foot office tower in the University Towne Center area.

Designed by DMJM Architects, Hines’ La Jolla Commons property was the first, high-rise multi-tenant office building in California to achieve Gold certification in the LEED program, sponsored by the national, nonprofit U.S. Green Building Council. It earned this certification for its first-class construction and state-of-the-art operating systems including a highly energy-efficient, exterior glass curtain wall system and a dual-water pipe system that reduces the use of fresh water by 87 percent. It is also the first project in San Diego to receive the “Designed to Earn the Energy Star” status under the Environmental Protection Agency’s national Energy Star program for commercial buildings.