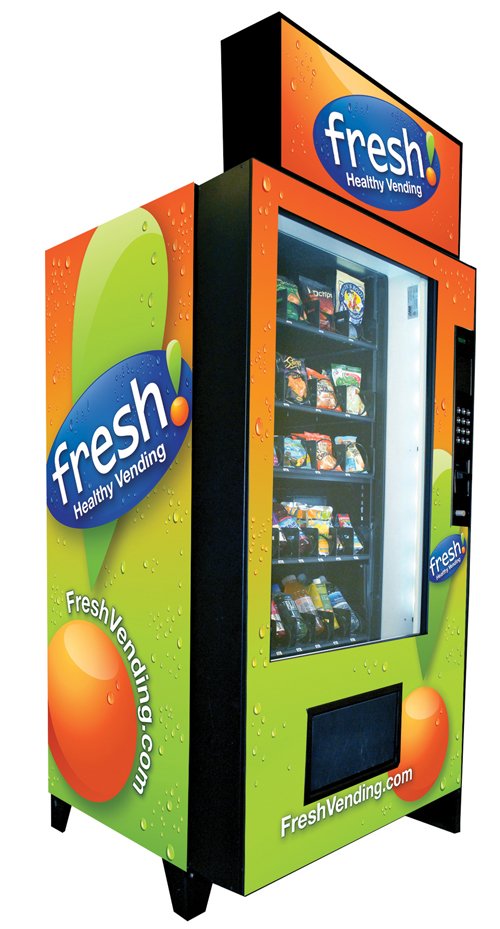 Fresh Healthy Vending International Inc. has about 230 franchisees throughout the United States, Canada, Puerto Rico and the Bahamas.

Financial data: Not available. Company signed with its first franchisee in June 2010.

Company description: Franchisor of vending machines that dispense healthy snacks and drinks, plus distributor of its own machines in the San Diego County market.

What makes the company innovative: Fresh Healthy Vending takes the traditional vending machine model and matches it with the current craze for nutritious snacks and drinks, and in the process, is building an expanding franchise business.

“People are tired of junk food,” he said. “Parents and schools and wellness departments and business are just tired of junk; they want something different.”

Backer says his brightly colored vending machines can be found in 20 states, and he expects to extend that reach in the months ahead.

“It’s catching on; we’re all over the place,” Backer said.

Because of the concerns over student obesity, many schools ousted vending machines over the past few years.

The trend has been accelerated by the signing of the Healthy, Hunger-Free Kids Act signed by President Obama in December, said Backer.

“This is where our vending machines come into the picture,” he said. “It’s a ‘Whole Foods’ vending machine. It’s like walking into a healthy food store.”

The market is big.

The National Automatic Merchandising Association estimates that only one in 10 members have machines in schools — after Congress passed a law tightening what foods could be sold in schools — compared with 25 percent in 2001.

Backer says he is hoping to take advantage of new standards soon to be imposed by the U.S. Department of Agriculture, which should make it easier to sign contracts with local school districts for vending opportunities.

He had previous experience in franchising, and was lured to San Diego to manage a vending business.

He said he got the idea to go out on his own after attending an organic food expo, and realizing that this variety of organic offerings were not being sold in vending machines.

That’s when he decided to buy YoNaturals Inc., the business he was managing.

Fresh Healthy charges $11,000 per machine to franchisees, who are required to restock the devices regularly with food and drink from Fresh Healthy.

The machines electronically transmit the number of items sold each day to the franchisee’s computer to track restocking needs.

The franchisees pay about 15 percent of sales to the sites that host machines.

Fresh Healthy Vending secures the locations, and maintains the machines.

Examples of health–food snacks include granola bars, as well as bottled water and fruit drinks and yogurts.

“Everything we sell is recognizable, tastes good and is affordable,” said Backer.

Backer said he’s planning to increase the number of vending machines in San Diego County to 500 from 50 over the next few years, and said that those machines would be company owned as opposed to operated by franchisees.

There are 10,500 vending machine operators in the U.S., according to the National Automatic Merchandising Association.

Miro Copic, professor of marketing at San Diego State University, said Fresh Healthy Vending is entering an untapped, but unproven market. But he said he thinks they can succeed and grow rapidly.

Copic noted that a number of smaller players are entering the market. And he said that even the large public companies are eyeing the healthy vending machine market, including soft drink bottler and distributor PepsiCo Inc., which owns a number of brands with a reputation as healthy, including the Chicago-based Quaker Oats Co.

“The vending space is a very important space, so it’s a wonderful opportunity” he said, however, noting that healthy snacks and drinks, especially such drinks as fruit smoothies, will require more restocking trips from the franchisees to succeed.