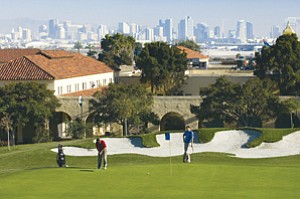 The award was only one of two given to candidates from the United States. Fifteen awards were given from entries submitted from throughout the world.

Projects are assessed on a number of disciplines involved in their creation.

“By recognizing outstanding achievements not only in real estate design, but in all aspects of a project from planning and execution to environmental impact and community benefits, the FIABCI Prix d’Excellence Awards perfectly embodies the spirit of FIABCI,” said Enrico Campagnoli, immediate past FIABCI World President.

The award was formally presented to Janice Weinrick, deputy executive director of the City of San Diego Redevelopment Agency, on behalf of the city, before the full City Council.

“To date, Liberty Station has generated $26 million of tax increment, and over $6 million of transient occupancy tax,” said Scott McMillin, chairman of The Corky McMillin Cos.

In conjunction with the City of San Diego, The Corky McMillin Cos. developed Liberty Station, transforming the former Naval Training Center into one of San Diego’s largest and most successful redevelopment projects.

“We’re excited to receive international recognition for what’s become so apparent to San Diegans: That the redevelopment of the Naval Training Center has been a success on every level,” said Mayor Jerry Sanders. “In addition to hosting one of the city’s largest parks and a new arts and culture district, Liberty Station has been a job and revenue generator, supporting city services in all our neighborhoods. It’s given proud new life to this important piece of San Diego history.”

San Diego City Councilman Kevin Faulconer stated, “The Corky McMillin Cos. has created a fantastic neighborhood of shops and restaurants, while preserving the legacy of the military, and honoring the former military base.”

New tenants continue to open their doors, bringing a variety of restaurants, art galleries, boutiques and other businesses. Two of Liberty Station’s newest tenants are Slater’s 50/50 gourmet burger restaurant and Stone Brewing World Bistro & Gardens. Liberty Station is also a destination for events for organizations throughout San Diego. It has hosted meetings and events for notable organizations such as the American Cancer Society, Rady Children’s Hospital-San Diego, and the San Diego universities.

Building Velocity.com, a construction research and reporting firm specializing in San Diego County construction activity, announced the release of its free San Diego Construction Fill Exchange, aka FillEx, service to help reduce the amount of materials that would otherwise arrive at local landfills. The San Diego FillEx is a free service that is available to contractors and members of the public alike.

Another free service offered is a San Diego Construction Week-In-Review. Here, users can view a quick, smart synopsis of construction activity from across San Diego County every week.

Local general contractor T.B. Penick & Sons Inc. has completed a $7.6 million renovation and addition work to the Fleet Numerical Meteorology and Oceanography Center, or FNMOC, for the U.S. Navy in Monterey.

Zephyr Partners acquired the 51-unit Ocean Street Apartments complex located at 2303 Ocean St. in Carlsbad for $11 million, or about $215,700 per unit, according to CoStar Group.

Morgan Stanley provided the borrower with a 10-year, fixed-rate, non-recourse loan with a 6 percent interest rate.

According to CoStar Group, CLG Property Fund A LP acquired the 64-unit Pacific Apartments at 700 Carey Road in Oceanside for $7.9 million, or about $125,800 per unit.

The multifamily building was built in 1974 and totals 44,568 square feet on 2.5 acres in San Diego County. The property features 23 one-bedroom and 40 two-bedroom apartment units.

Christopher Zorbas and Stewart Weston of Marcus and Millichap represented both the seller and the buyer in the sale.

Investor Keith Dindinger purchased the 8,434-square-foot office building located at 16840 Bernardo Center Drive in San Diego for $2.7 million, or about $321 per square foot, according to CoStar Group.

The multi-tenant building was 52 percent occupied at the time of the sale by two tenants, Anderson & Yocum and Total Vision Family Care Optometry. The remaining space was previously occupied by the seller, Wells Fargo Bank. The new owner will lease the space out.

Cassidy Turley BRE Commercial recently announced the $1 million sale of one of the industrial warehouse buildings at One Piper Ranch in Otay Mesa.

The 14,156-square-foot building sits on 1.04 acres of land at 8735 Dead Stick Road and is planned to be a manufacturing and distribution center for women’s apparel.

“Many manufacturing companies are starting to relocate to the U.S. side of the border in Otay Mesa rather than the Mexico side in Tijuana because quality real estate buildings are available for sale or lease in Otay Mesa at rates far below Mexico or even other San Diego submarkets,” said Regan Tully, an industrial specialist with Cassidy Turley BRE Commercial, who represented the buyer, Jipson LLC, in the transaction.