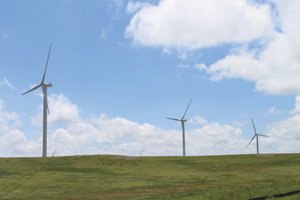 Cedar Creek 2, a wind farm of Sempra Generation in Colorado, is part of the company’s expanding portfolio of renewable energy facilities.

When it comes to developing new sources of renewable energy, few companies can match Sempra Generation.

The subsidiary of Sempra Energy has completed three solar generating plants in the past three years, and in June began construction of another solar plant outside Phoenix that will be the largest in the nation when it’s done in 2013.

The Sempra unit that is focused on building, owning and operating power plants still derives the bulk of the power from natural gas, but solar and wind are becoming a larger part of its portfolio, said Jim Sahagian, vice president of commercial development.

“Since we were founded, we’ve invested close to $1 billion in natural gas infrastructure and close to that same amount in wind and solar,” Sahagian said.

During the next five years, the company plans to invest about $3 billion in solar and wind projects, he said.

Much of Sempra’s alternative energy strategy is the result of mandates approved by the California Legislature dating to 2002 that initially required investor-owned utilities to generate 20 percent of their power from renewable sources by 2017. That ratio was increased this year to 33 percent, with compliance moved back to 2020.

That mandate is also a driving force behind San Diego Gas & Electric Co.’s current Sunrise Powerlink transmission line that began construction last year. SDG&E, a separate subsidiary of Sempra, is spending about $1.8 billion on the controversial project scheduled for completion in 2012.

In June, the company broke ground for a new solar plant on 4,000 acres about 45 miles west of Phoenix that will eventually generate up to 700 megawatts, and claim title to the largest photovoltaic solar power installation in North America. The first phase of the plant, Mesquite Solar I, should be completed in 2013 and will be able to generate 150 megawatts, sufficient to power some 56,000 homes.

The electric power from Mesquite Solar I, like most of the other plants, is sold to power companies other than those owned by Sempra. In the new Arizona plant’s case, Pacific Gas & Electric is the buyer under a 20-year contract.

Sahagian said Sempra Generation has the ability to sell the power to SDG&E but hasn’t done so because its contracts must be approved by the state’s Public Utilities Commission, and if a contract was with another Sempra subsidiary, it would likely trigger a much tougher review.

Jim Waring, president of CleanTech San Diego, said he had no problem with the fact that all of Sempra Generation’s plants and its energy is going outside San Diego. “I think the more renewable production there is, no matter where it is and who consumes it, if you believe there is climate change and in the necessity of reducing our carbon footprint, I applaud it,” he said.

To get the expensive plants constructed, Generation sometimes enters into partnerships with other large power companies to mitigate its risks and share knowledge in the new renewable energy sector. In 2009, it co-developed a 200-megawatt solar plant in Benton County, Ind., with BP Wind Energy, and in June it completed a 250-megawatt wind farm near New Raymer, Colo., also with BPWE that will provide sufficient electricity to power some 75,000 homes, the company said.

Developing wind power plants is more challenging than solar because most of the best places to capture wind are in remote areas and need to be transmitted to electric power plants.