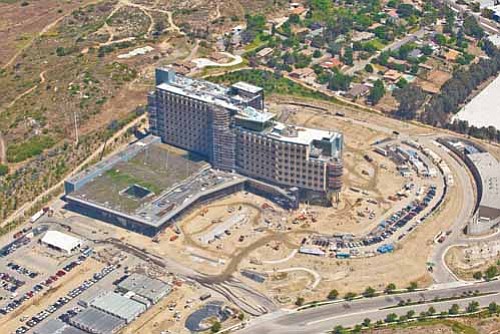 Palomar Medical Center West is being built with an eye on the future. The $956 million facility will be able to accommodate rapidly changing medical technologies.

Much of the thinking behind the $956 million Palomar Medical Center West, under construction in western Escondido, is geared to blending in with the green rolling hillsides from which the hospital can be seen towering for miles around.

When the 11-story, 750,000-square-foot facility is up and running in late summer 2012, patients and visitors will view a lush 1.5-acre, eco-friendly rooftop garden with native plants. Each floor will have two or three tree-lined terraces where people can relax and take in the surrounding landscape. Skylights will let natural lighting into all areas of the facility, even into staff quarters located in the basement area.

Those overseeing the project, being built by Palomar Pomerado Health, say the hospital was designed in large part to reflect industry studies showing patients heal better and faster in relaxing settings where they are surrounded by loved ones, so getting visitors to spend more time with patients became a goal.

“One of the priorities was making the rooms and the public spaces more inviting and relaxing, so the experience has more of a hospitality and less of a clinical feel,” said Wendy Cohen, director of facilities construction for the public health care district. “We intentionally got people to design the public areas who have worked on things like cruise ships and hotels.”

All of the hospital’s 288 patient rooms will be single-occupancy to ensure privacy for patients and visitors, with each room having the exact same layout to bolster the accuracy of care. There are also adjacent family zones, with amenities like Wi-Fi access, geared to encouraging visits.

From a construction standpoint, among the keys to keeping services up to date for years to come is a system of open-span trusses, which gives the hospital the ability to reconfigure diagnostic and treatment rooms as needed. For instance, it will be able to open up additional space, or contract other areas, to allow equipment to be moved in and out, without having to undergo costly and disruptive retrofits.

“It was imperative to have that flexibility later on, because the medical technology is always changing, even as you’re doing the initial construction,” Cohen said.

The project has been in the planning stages during the past decade, and construction has been under way since 2008 at the 40-acre site off Citracado Parkway. The hospital will also have 12 operating rooms, a trauma center and helipad. The facility will employ approximately 2,000 when fully operational.

Construction is being funded in part through a $400 million voter-approved public bond measure, along with other revenue bonds and cash financing undertaken by the hospital district.

Cohen said Palomar Pomerado officials were initially looking to retrofit the district’s existing older hospital in Escondido to meet state requirements for earthquake readiness, which were originally set to take effect in 2013. The deadline has since been extended to 2030.

Planners found that a seismic retrofit of the existing building would have cost around $700 million, and Cohen said that cost alone would not have included improvements to patient care. A completely new hospital was deemed more feasible, although the older building will likely stay open for a while.

Brian Gracz, a project executive in the San Diego office of DPR Construction, the general contractor on the hospital complex, said the Palomar Pomerado facility is the largest local health care project tackled by the firm.

He said health care work has long been vital to the company’s national work mix, especially in the current economy, and its recently completed projects include the Sulpizio Cardiovascular Center at UC San Diego.

“These facilities need to be planned to accommodate technology that doesn’t even exist yet,” Gracz said. “Hospitals like this need to be able to serve their communities for 50 or 75 years or more.”