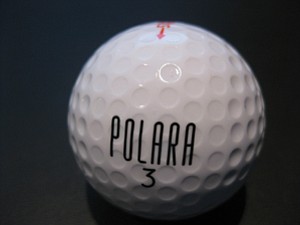 Polara Golf has resurrected an improved version of a self-correcting golf ball. The company says 85 percent of players hit the ball incorrectly.

Investors: 15, including Felker, one of the original employees of the then Callaway Golf Ball Co.

What makes the company innovative: Markets a unique golf ball with differently sized dimples first developed in the 1970s that corrects hooks and slices up to 75 percent, according to testing results.

The word on the course is out; the self-correcting golf ball is in.

Polara Golf has been marketing a unique ball at its Web site and weekend golf shows since launching sales five months ago.

And duffers have been lining up in droves to buy the balls, which correct hooks and slices so that long drives are much more accurate.

The dimples are deep at the circumference and tiny at the poles, which helps overcome poor swings, he says.

Polara is a Carlsbad-based unit of closely-held Aero-X Golf Inc., located in Virginia.

Felker, one of the early employees at the original Callaway Golf Ball Co., also serves as chair of the company, launched with capital from 15 investors, most amateur golfing enthusiasts.

The ball with the unusual design has a “past.”

Scientists Daniel Nepela and Fred Holmstrom invented the sphere in the early 1970s, and they sold 100,000 balls under the “Happy Hooker” brand.

But the two inventors soon got into a dispute with the US Golf Association, which banned the design from USGA sanctioned tournaments (“because it actually works,” said Felker). The group makes up the rules for the professional game.

The two inventors sued, and settled for $1.4 million, walking away from the business and the patents.

Some 35 years later, several investors, including Felker, decided to resurrect the ball for recreational players who seek to end some of the frustration of driving the ball.

“Because our products are only for recreational golfers, they have no relevance to — and therefore will not impact or change — the USGA or the game for professional golfers,” Felker said. “Customers say they just want to have fun playing on the course.”

Felker said the company decided to sell on the Internet, as well as shows and retail outlets, because of the growing popularity of online retail sites for golfers.

He notes that 14 percent of all U.S. golf ball sales are conducted through the Internet, a percentage expected to increase to 19 percent in 2012.

One consulting firm says about 150 million balls are sold each year in the U.S.

The ball sells for a 25 percent premium compared to the price of regular balls, says Felker. However, Polara does offer discounts at shows and online.

After picking up rights to the ball, Felker says the firm conducted tests at Princeton University to determine how the ball works, and a number of improvements to the original design were made.

The design was also tested at Golf Laboratories Inc. in Escondido, an independent testing facility under the supervision of a San Diego State University statistics professor.

More than 85 percent of all players hit the ball wrong, Felker says, so the ball should prove a boon for weekend players.

Felker says the ball should be teed high, and hit with a high lofted driver for best effect.

Kevin Snyder, shop manager at the Balboa Park Golf Course, said he started hitting the balls about two years ago when first approached by Polara for testing.

“Their ball was 90 percent straighter than the other balls I hit,” said Snyder. “I didn’t even realize I was pulling to the left.”

“It’s crazy how straight the ball goes,” said Snyder, who has worked as an assistant golf pro at other courses.

The Polara ball is just the first step for the new company, says Felker.

“Our goal over the next three years is to introduce advanced technology products that cover various aspects of the game to meet the needs of recreational golfers,” said Felker.