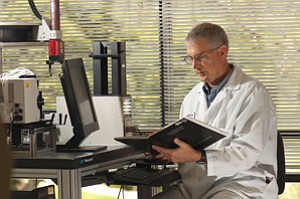 Company description: A pharmaceutical company that focuses on drug discovery and development.

“It will happen by the end of the year, not that it couldn’t happen earlier,” McKay said.

For Ligand, that will mark a major turn of events. “The company has been so bad for so long, it’s incredible,” said Jeffrey S. Cohen, an analyst who covers Ligand at C. K. Cooper & Co. in Irvine. He noted that at the end of 2010, the company had an accumulated deficit of nearly $692 million. “The stock chart has been straight south for years and years. If you owned the stock five years ago it was $70, and now it’s $10. The question is: Has it bottomed out? I think it has.”

Ligand, a drug discovery and development company, was founded in 1987 and has endured annual net losses every year in large part due to an expensive overall cost structure, in addition to costly acquisitions and high legal costs in recent years, Cohen said.

But the company began a transformation four years ago when new management came in. John L. Higgins took over as CEO in 2007, drastically cutting expenses and embracing a new business model that’s centered on acquiring distressed biotechs and partnering with large pharmaceutical companies, such as GlaxoSmithKline plc., Merck & Co. Inc. and Pfizer Inc., that will bear the financial burden of commercializing drugs.

In November — in a move that Higgins said capped the company’s extensive restructuring efforts — Ligand’s board of directors approved a 1-for-6 reverse stock split. “Ligand is focused more than ever on becoming a financial growth company,” Higgins said, in a statement.

Of Ligand’s many drugs that have gone to big pharmaceutical companies, there is one that is generally regarded as being the most valuable. That’s Promacta, the first oral medication to increase platelet production for people with serious blood disorders. In 2008, Ligand granted GlaxoSmithKline exclusive rights to Promacta in a deal valued at $163 million plus royalties.

Last year, royalties from the drug brought in between $2 million and $3 million, and this year that amount is expected double, McKay said. However, if the drug gains approval from the U.S. Food and Drug Administration for the treatment of hepatitis C, market potential of the drug will explode.

People with hepatitis C, a liver disease, must put their treatment on hold if their platelet level declines past a certain threshold. Promacta is being tested as a way to boost the platelet level so therapy can resume.

“We have two phase three studies wrapping up in the third quarter, with data coming out in December,” McKay said. “That will be a significant moment. If that data is positive, then suddenly Promacta becomes a lot more valuable. This event is a big deal to Ligand.”

If all goes as expected, annual royalty revenues from the drug could see a major boost in 2013 to as much as $12 million, McKay said.

The other program with great potential for Ligand’s balance sheet is known as SARM, a drug that increases muscle mass and can be used to treat patients with muscle-wasting conditions. SARM is on the verge of being licensed to a company that can bring it through the FDA approval process and market it to doctors, McKay said.

“There’s a potential huge market for SARM,” Cohen said. “With good phase one data, they could potentially do an all-out $100 million to $200 million deal with a large pharmaceutical company.”

Kelly Quigley is a freelance writer for the San Diego Business Journal.