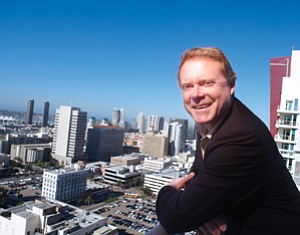 Jim Silverwood of Affirmed Housing Group, an 18-year veteran in the local affordable housing business, says his firm’s recent emphasis has been on urban infill and much higher density projects. Photo by Stephen Whalen.

There have been a host of challenges for San Diego County’s residential real estate developers since the housing market peaked in 2005, but many have found ways to stay active while awaiting an economic turnaround.

Steve Doyle, president of the San Diego-Riverside business group for Brookfield Homes, said his firm has been selling dwellings “in the 130 to 150 homes per year range for the last couple of years.” In 2005 and 2006, “we were building between 500 and 600 homes a year” and selling buildable lots to other developers.

Developers who want to survive have adjusted to the changing marketplace, he said. They recognize that in the future there will be more opportunities in attached homes and urban-infill projects. The days of large developments of single-family homes along the urban fringe are coming to an end.

Some builders and local contractors have expanded their services to include the rehabilitation of foreclosed homes, Doyle said. Others are waiting out the recession by working on such things as mini-storage centers and convenience stores.

“You definitely will see more infill or smaller lot single-family development” as the economy improves and home construction accelerates, Doyle added. Densities will be higher. “The land that is remaining in San Diego and is available for development is dwindling fast, yet population growth continues to be very strong.”

Future homes will be built near employment centers, rather than in the suburbs, he said. “When you are looking at $4 and $5 for a gallon of gas, you will find people looking for homes that are closer to jobs.”

He noted that the market for new homes has begun to pick up, even though the recession lingers. “We are seeing better interest, better traffic and more buyers this year than last year. We are building attached product in the South County and detached product in the North County.”

Doyle, who has seen several real estate booms and busts, joined Brookfield in 1993. He noted that many builders have moved their operations out of San Diego County in recent years.

“There are a few still brave enough to be independent and fully functioning in San Diego, but the larger public builders who are looking to buy finished or near-finished lots have consolidated their efforts somewhere in the Irvine-Corona corridor” where there are more building opportunities.

One growth opportunity will come in meeting the housing needs of low-wage earners, said Jim Silverwood, president and chief executive officer of Affirmed Housing Group. He oversees investor and lender negotiations, financial underwriting and construction and asset management for the company. He has spent 18 years in the affordable housing business here.

“We develop affordable and work force housing throughout California,” he said. “Years ago we did more suburban affordable housing. More recently our emphasis has been on urban infill and much higher density.”

The company has placed a high emphasis on green building and keeping homes close to transit centers. The focus of the business is creating rental housing. He noted that the strong opposition to rental housing that once was commonplace in the San Diego area has diminished in recent years. That is because community leaders are trying to find more environmentally sustainable ways to approach construction, he said.

Sheltered From the Storm

The company is based in the Sabre Springs area, near the intersection of Interstate 15 and state Route 56. It often partners with government agencies and nonprofit organizations. Affirmed Housing Group has not seen the same rise and fall of business that has plagued most local builders.

“We did not have a real boom period when the for-sale market went through its dramatic run up,” Silverwood said. “In general, our revenue is actually higher now than during the boom. We have had years where we have delivered over 400 units. We have had years where we have delivered as few as 40 or 50. Our success often is driven by our ability to access other funding sources. We have to cobble together several layers of funding. It is a rather complicated and time-consuming process.”

High-end home builder Bill Davidson, president of Davidson Communities, has been a fixture on the San Diego housing scene for more than three decades. Davidson said his company’s activity has fallen steeply since the days of the housing boom, which raged from the early to mid-2000s.

“We have had very little activity the last couple of years,” he said. “My company is as small as it has been since I started in 1978. I am guessing 16 or 17 houses last year. We would be up to 300, 320 in our best year. I don’t see San Diego as being a community that can support that kind of activity any longer. Lots are not as accessible as they have been over the last 20, 30 years.”

Davidson said he is among those who are making the transition from suburban single-family lot development to infill construction. Future home construction here may take place on the site of a former bowling alley or an underutilized shopping center, he explained. Coffee shops and grocery stores may be incorporated into new housing developments.

“We will have to rezone and go through the planning process of trying to create mixed-use, which I think is a trend for the future,” he said.

Davidson, who is based in Del Mar, said his company will remain active in the San Diego region, despite the challenges. “My roots are here,” he said.

Guy Asaro, president of McMillin Homes, which is part of the Point Loma-based The Corky McMillin Cos., has been in the industry for nearly three decades. Like Davidson, he sees a trend toward infill development. Although the business is changing, he remains optimistic about the future for local builders.

“We see volumes in sales increasing in 2011,” he said. “We certainly have seen a lot of price stability. My impression is that consumers are understanding that real estate is undervalued and in the long term it is a good investment.”

Emmet Pierce is a freelance writer for the San Diego Business Journal.