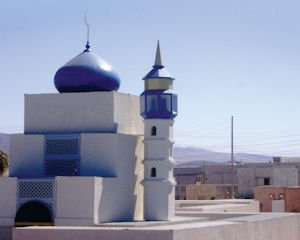 Fort Irwin is one of the military bases where Lexicon Consulting trains troops in realistically simulated Middle Eastern settings.

As a U.S. Army commander, Jamie Latshaw helped train troops being deployed to Iraq and Afghanistan, but felt the training they received could be improved.

After she retired in 2005, she and her husband, Leroy, who is also a retired Army veteran, decided to form a business that did just that — provide the most realistic cultural awareness and military training to troops being transferred to these two inhospitable parts of the world.

Earlier this month the Latshaws’ business, Lexicon Consulting Inc. based in El Cajon, was recognized as America’s fourth fastest-growing private company by Inc. Magazine, having grown by 14,018 percent over three years from 2007 to last year’s revenue of $14.4 million.

Though the national recognition is certainly appreciated, Jamie Latshaw says the biggest reward that she and her co-workers get is hearing from returning troops that the training they received made a difference while they were in harm’s way.

“We saw how important it was for soldiers to receive realistic training before they put their lives on the line,” she said. “Some officers who returned have told us that the training they received was very helpful, especially when they were entering a new village and would negotiate with Iraqi citizens.”

While in the Army, Latshaw said her regiment provided field training but the so-called “enemy” troops were actually fellow Army soldiers playing roles.

“We thought we could do it better,” Latshaw said.

The key element missing from the Army’s training was a more realistic approach to what soldiers should expect along with a cultural awareness and rudimentary language skills that could give them an edge in their mission, she said.

To accomplish that, the Latshaws enlisted native Iraqi people to play residents of an authentically simulated Iraqi village. Many of the role players are Chaldeans, or Christians, who fled during the reign of Saddam Hussein. Some of the recruits hired to play roles in the immersion training were so supportive of the United States and its mission that they said they weren’t interested in getting paid, Latshaw said.

Finding the right people wasn’t that difficult since San Diego’s East County area has one of the largest concentrations of Iraqis in the nation. “That’s why we set up our headquarters in El Cajon,” she said.

While the business is clearly on a roll today, the first few years after they formed it were difficult. “The first two to three years we were living with my parents,” said Latshaw of their stay in Fillmore, northwest of Beverly Hills.

Among the first federal contracts the business received had nothing to do with military training, but to paint the Cabrillo National Monument.

Finding working capital was rough in the beginning, Latshaw said. Most of the banks the business approached told them no until they obtained a $100,000 Small Business Administration loan from California Oaks State Bank. It helped a lot that the president of the bank was a graduate of the West Point military academy, she said.

In 2008, the business caught a break when it became a subcontractor to another San Diego military immersion training business, Strategic Operations, a unit of Stu Segall Productions, based in Kearny Mesa.

Kit Lavell, executive vice president of Strategic Operations, said since his firm was launched in 2002, it’s provided what the company calls “hyperrealistic” military training to more than 400,000 soldiers, sailors and Marines.

Lexicon’s language and cultural training is an essential part of the overall training sessions, he said.

“As the war has changed to more of a civil affairs work and winning hearts and minds, one of the most important aspects is being able to relate to the people, understand their culture and language and engage them in a way that lets us work with them,” Lavell said.

Capt. Mark Fraser, an officer in charge at Fort Irwin, one the sites where Lexicon conducts its training, says the people the company provides are actual Iraqis and Afghanis, and lend credibility to the various scenarios the Army sets up.

“Honestly, it’s the most intense training that you can get other than being over there,” Fraser said.

Lexicon’s training is usually conducted at military bases throughout the country. At Fort Irwin, Fraser said there are nine towns that replicate Iraqi or Afghanistan villages, depending on the needs of the military agency.

Because the training often involves professional film companies like Segall’s, the scenarios the soldiers are put through closely resemble real life, and usually are accompanied by mock gunfire and explosions. Sometimes the sessions use actors who are amputees with wounds that look like they were just inflicted.

“I’ve seen some soldiers freak out because it’s so real, they think they’re back over there,” said Fraser.

The Latshaws met earlier in the decade while both were serving in Operation Joint Guardian in Macedonia, north of Greece, and part of the staging area to halt fighting in Kosovo.

Leroy Latshaw, who is a former helicopter pilot and retired as a chief warrant officer, branched out from Lexicon this year, starting his own business called Global Tactical Training that focuses on military tactics practices in the Middle East.

Lexicon now has about six ongoing contracts with several branches of the military. Contracts can range from several days, but most are for a year. Recently the business has been trying to find 50 linguists that will be sent to Iraq. Salaries for linguists that work with troops in the Middle East can be $150,000 to $250,000 depending on experience and the assignment, Latshaw said.

Now at 50 full-time staffers, Lexicon has 467 part-timers on its payroll, most of whom work sporadically. The hired personnel for the training exercises can earn $14 to $25 hourly, depending on their roles, education and security clearance level. About 60 percent come from the San Diego region, Jamie Latshaw said.

The U.S. Army makes up about 60 percent of Lexicon’s business today, and the next largest customers are the U.S. Marine Corps and U.S. Navy, she said.

The military’s dependence on outsourcing some of its training is a direct result of our nation’s increased presence in the Middle East in the past several years, said Ken Slaght, president of the San Diego chapter of the National Defense Industrial Association, a trade group for defense contractors.

“The real value-added for an industrial-military partnership is that industry can converge (on a specific need) a lot faster than the government guys can,” Slaght said.

A particular need that has been ramping up in recent years is “anything that’s linked to cultural training and languages that are significantly different” from English, he said. Such needs are “growing exponentially,” he added.

In some ways, Lexicon is growing too fast, Jamie Latshaw admitted.

“There are disadvantages to growing fast,” she said. “You’re always playing catch-up. There never seems to be enough time to step back and look at where you are.”