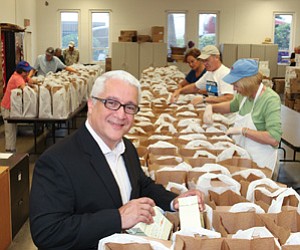 Alberto Cortés is executive director of Mama’s Kitchen, which delivers food to people with AIDS, HIV or cancer and operates a food pantry for the benefit of low-income, HIV-positive clients. Photo by Melissa Jacobs.

It’s not quite FedEx or the post office, in scale or appearance.

But a logistical feat similar to that performed by the big delivery services happens every couple of days from the basement of a church north of downtown San Diego.

This is where the meals of Mama’s Kitchen are assembled, and where they begin their cross-town trips to the homes of people with AIDS, HIV or cancer. In many cases, the recipients are too ill to cook for themselves, and don’t have the resources to order food from restaurants.

The free meal deliveries happen with financial support from area businesses, large and small. At times, businesses lend expertise to the operation. In addition, the businesses offer in-kind services and volunteer labor.

Corporations such as Qualcomm Inc., Union Bank N.A. and Wells Fargo have a long history of supporting the organization, he said, “in multitudes of ways.” The Sycuan Band of the Kumeyaay Nation, which operates Sycuan Casino, is another longtime supporter.

This month, the nonprofit celebrates its 20th anniversary.

It’s Friday morning and the day’s meal packages have yet to go out. Hundreds of grocery bags are lined up on a long table that recedes in perspective.

Each package will contain nine meals: Friday’s dinner, three meals for Saturday, three for Sunday plus a breakfast and lunch for Monday.

In the kitchen, workers fill plastic trays with food and seal them with plastic wrap. A bright yellow sticker goes on top, telling recipients that in spite of the Labor Day holiday, they can expect the next delivery on Monday. Mama’s Kitchen provides meals for every day of the year, keeping a Monday-Wednesday-Friday delivery schedule.

The room is temporarily empty, with the exception of Anne Garger, the organization’s executive chef, and Bill Patten, director of client and volunteer services. Garger’s job is to fill the brown bags. Patten’s is to sort out the logistics of where the bags need to go.

Currently, Patten says, there are 33 routes. Generally, there are nine clients on each route, which a volunteer driver must cover in two hours, targeting a delivery time between 4 and 6 p.m. One route covers Ocean Beach, Pacific Beach, Kearny Mesa and Mission Valley. An atypical route makes 19 deliveries to North County — but 13 deliveries are to the same housing complex.

Volunteers deliver the meals in their private cars. They logged 140,602 miles in 2009. Mama’s Kitchen estimates the value of volunteer time and travel last year (calculating 55 cents per mile) was nearly $750,000.

All donations contribute to the organization’s viability, Cortés says.

As in the for-profit world, Mama’s Kitchen finds it prudent to have diversified sources of revenue. Government support makes up 20 percent of the budget, Cortés says.

One of the bigger donors is Sycuan, which operates resort and casino properties east of El Cajon. Sycuan has donated to Mama’s Kitchen since 1998 and increased its sponsorship level in 2004, says Anita Norton, director of community development at Sycuan Casino.

“We love what Mama’s Kitchen does for our community,” said Norton. Sycuan gave in excess of $25,000 to the organization in 2009, according to the charity’s annual report, and helped sponsor the annual Mama’s Day party in May, which netted more than $145,000 for the charity.

The casino and resort’s food service employees look forward to the Mama’s Day fundraiser every year, says Norton, adding that Sycuan supports a variety of local charities. This year, Sycuan was one of 65 caterers at the event, setting up a savory station serving entrée fare and a sweet station with desserts.

In addition, Donald Goff, Sycuan’s food and beverage director, sits on the Mama’s Kitchen board of directors.

One small-business donor to Mama’s Kitchen is MDC Financial Service Group Inc., a mortgage lender with seven employees. MDC offers financial support as well as in-kind support. The business is three blocks from Mama’s Kitchen and offers its facilities for phone banks and “whatever Mama’s Kitchen needs,” said owner Michael Dodt, who also sits on the Mama’s Kitchen board. Dodt says he likes to give to neighborhood organizations, and wants to support the gay, lesbian and transgender community that is part of the local employment base.

Private foundations, direct mail appeals, fundraisers and individual contributions all help round out the income stream at Mama’s Kitchen, says Cortés, who has been executive director since 2002.

Cortés is a U.S. Navy veteran with 20 years of management experience in nonprofit organizations offering HIV and AIDS services. He admits he did not have a strong background in fundraising when he took on the top job — but says he had an able teacher. He credits Edith Glassey, his fundraising director for his first five years on the job, with introducing him to the fine points of fundraising. Glassey now works as director of development and communication with San Diego-based Promises2Kids, formerly the Child Abuse Prevention Foundation.

Mama’s Kitchen marked a milestone in July 2009 when San Diego Mayor Jerry Sanders delivered the 5 millionth meal to clients identified only as Allen and David. Mama’s Kitchen keeps the identities of its clients confidential.

In some cases, Mama’s Kitchen clients have children, who receive meals too.

Mama’s Kitchen also runs a food pantry to supplement the resources of low-income, HIV-positive clients. The pantry provided 80,000 pounds of food to 727 clients in 2009, representing a 9.5 percent increase from the prior year.