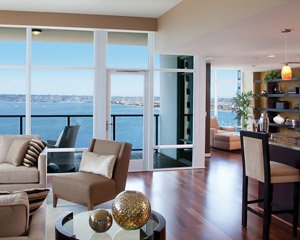 This model residence in the 32-story Sapphire Tower downtown is recognized by the Building Industry Association’s Icon Awards as the Best Interior Design for an Attached Product.

Sapphire Tower was recognized among the best of San Diego’s building industry at the recent Icon Awards, a Building Industry Association celebration.

The award-winning model priced at $2.5 million has clean lines and rich textures which showcase the sophisticated palette of java, warm pewter, taupe and cream. The use of multiple shades of green evokes the presence of the outdoors, even at 31 stories. The highest level of finishes and furnishings provides an elegant backdrop for both the floor-to-ceiling views and the ambience of downtown San Diego.

Combining the former Building Industry’s Greatest awards and the Sales and Marketing awards into one event, the BIA’s Icon Awards includes categories for best industry professionals and representatives, projects, marketing and design.

A development of Centurion Partners, Sapphire Tower is a 32-story tower with 97 luxury homes, including one-bedroom, two-bedroom and penthouse designs. The top nine floors offer half-floor penthouses with private elevator entries and spacious floor plans of nearly 3,000 square feet. On floors eight through 23, there are only four units per floor so that each is a corner home, enabling occupants to have privacy and great views of the cityscape or San Diego Bay.

Penthouses range in price from $2.4 million to almost $3 million and lower units are priced from $500,000 to $1.4 million. Only a handful of homes are still available.

According to Chuck Sigmon, director of sales and marketing for Sapphire Tower, since November 2008, the project has captured 43 percent of all sales in the 92101 ZIP code listed above a selling price of $1.48 million.

Located on the southwest corner of Kettner Boulevard and A Street in downtown San Diego, building amenities include a large pool, hot tub and sundeck and a fully equipped fitness center and spa. Sapphire Tower has been the recipient of a Silver National Sales & Marketing award for the Best Model Home for Over $1 Million.

Sullivan Solar Power announced the activation of the largest vertical solar array in the United States. The design and installation of the array was handled by the locally based firm and boasts of more than 350 panels along the south façade and roof of the San Diego City College Career Technology Center in downtown.

“The San Diego Community College District’s Green Building Policy is an important initiative spurred by the recognition of financial as well as environmental reasons to make green decisions for a sustainable future,” said Daniel Sullivan, founder and president of Sullivan Solar Power. “Not only will the installation generate enough solar power to provide for a portion of the building’s energy needs, but the vertical array also provides a very visual statement about the district’s commitment to renewable energy.”

The California Center for Sustainable Energy will be awarding the organization a rebate check from the California Solar Initiative for $105,517.

The system is monitored via a Web-based interface that allows Sullivan Solar Power to see the daily, weekly, monthly, and yearly data of the system’s production output in order to determine its performance through its lifetime. The solar photovoltaic system is projected to generate roughly 67,558 kilowatt-hours per year or enough energy to power more than 1,000 homes for one day. It will generate clean energy for more than 25 years.

BSD Builders Inc. has completed a complex $24.7 million expansion of the Inland Valley Medical Center in Wildomar, according to Steve Sherrer, principal with the San Diego-based general contractor and construction management firm that specializes in commercial, health care, biotech, industrial and corporate improvements.

The Inland Valley Medical Center remained open during the project, which added to the logistic challenges of joining free-standing additions with existing facilities. The project also required relocating the path of travel for emergency vehicles during construction, temporarily relocating the ambulance bay, and the creating of temporary paths during the work for safety and access to the heliport.

The Inland Valley Medical Center is a member of the Southwest Healthcare System. The owner is Universal Health Services of Rancho Springs Inc.

Earlier this fall, 450 of UC San Diego’s graduate students moved into the Rita Atkinson Residences, which features a “green roof,” dozens of luxury-style apartment amenities and a pair of meditation labyrinths tucked into quiet outdoor alcoves.

Graduate students who are enrolled in courses ranging from electrical engineering to theater and dance to physics, neuroscience and biology moved into “The Rita,” named in honor of the wife of former UCSD Chancellor Richard Atkinson, who is also the former president of the 10-campus University of California system. The Atkinsons donated $5.7 million to support fellowships for graduate students at the university.

The residents of The Rita will study and perform research on the UCSD campus where 60 percent of doctoral programs are ranked among the top 20 programs in their fields nationwide, according to a comprehensive assessment by The National Research Council released Sept. 28.

“These graduate students will do more than soak up knowledge from faculty — they’re creating it, and in the process, they are originating new academic disciplines, new ways to see and interact with the world, and even new ways to deal with the energy crisis,” said Kim Barrett, dean of Graduate Studies at UCSD. “I’m optimistic that the graduate student fellowships made possible by the generous gift of the Atkinsons, combined with convenient, affordable on-campus housing, will enhance UC San Diego’s ability to compete for the best and brightest graduate students in the nation.”

All appliances used in The Rita are Energy Star rated and the modern light fixtures use low-wattage fluorescent bulbs. Floors are polished concrete, all water fixtures are low-flow and the landscaping requires little irrigation. All 226 apartments are fully furnished and include amenities such as granite countertops, cable TV hookups, and modern beds with underside storage.

The building has pairs of refuse chutes — one for waste and the other for recyclables. The fourth-floor has a laundry and gym. There are conference, study and meeting rooms and a courtyard barbecue area where friends and colleagues can talk, relax and eat.

The development is within walking distance to dozens of research laboratories and classrooms, as well as mass transit stops, a shopping mall, grocery store and restaurants. The project, similar to other new student housing projects recently completed or under construction, has no parking lot. Instead, mass transit and a wide range of alternative transportation services will be provided to the tenants.

“This project is all about UCSD’s students. The design, location, price and conveniences will address students’ input in several customer satisfaction surveys,” said Mark Cunningham, executive director of UCSD’s Department of Housing, Dining and Hospitality. “In addition, this project took advantage of historically low interest rates for project financing and an extremely competitive construction environment to keep costs down.”

The Chicago-based architect Valerio Dwalt Train Associates designed a single building of 164,454 square feet composed of two L-shaped wings, one seven stories high and the other nine stories. The project, which is financed by low-interest University of California bonds, will be paid off entirely by rental income.

The construction team plans to apply for Leadership in Energy and Environmental Design Gold certification, with 43 features that the U.S. Green Building Council rates as significant contributors to a sustainable design. The green features include reuse and recycling of construction site materials, energy efficiency, daylight and outdoor views for 90 percent of interior building spaces, low-emitting paint, adhesives and other materials, low-flow water fixtures and water-efficient landscaping.

The general contractor for the project was Webcor Builders, a San Mateo-based company with a regional office in San Diego. Webcor, Valerio Dwalt Train architects and UCSD project managers used a so-called design-build process that enabled all parties to collaborate closely on scheduling, coordination and agree on the inevitable changes. The process allowed the team to keep construction costs down and accelerated construction to the degree that students were able to move into the apartments one year ahead of schedule.

“From the lead contractor and architect down to the concrete workers, electricians and other trade workers, everybody felt a deep sense of pride in the finished product,” said Boone Hellmann, campus architect and associate vice chancellor of design and construction for UCSD. “This building may be a mere student-housing project, but it’s a marvel of design, teamwork and craftsmanship that the university and greater San Diego also can be very proud of.”