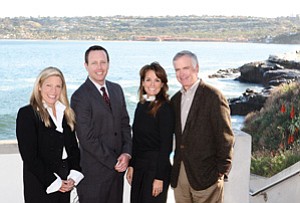 San Diego’s clean-technology business owners and supporters will find themselves in good company Nov. 30 at an international summit of high-power attendees from four countries working in a range of fields, including water, solar, transportation and biofuels. Photo by Melissa Jacobs.

San Diego’s clean-technology business owners and supporters will find themselves in good company Nov. 30 at an international summit of high-power attendees from four countries working in a range of fields, including water, solar, transportation and biofuels.

Local business owners, a representative from a nonprofit trade group promoting clean-tech and San Diego Mayor Jerry Sanders say the International Showcase at USD is helping to put the region on the worldwide clean-tech map, and a testament to three years of efforts to promote innovation and investment in the burgeoning space.

The nonprofit hosting the program is CleanTech San Diego, which is ranked in the top 10 among the world’s clean-tech organizations. Recognition this early in the game is remarkable, say supporters, considering that the organization was founded in 2007 through an initiative of the Mayor’s Office and several local businesses. The entity that created the ranking, Sustainable World Capital, placed the San Diego group No. 7 on the list.

Noteworthy clean-tech players coming to town are important validation, says Sanders. Clean-technology is becoming the world’s — and the region’s — latest in-demand brand, with the potential of bringing greater, long-lasting business growth in the years ahead.

“It’s a terrific achievement for us,” said Sanders, referring to the first International Showcase, which is drawing panelists from Australia, Canada, Germany and Switzerland, and which he will also attend. About 500 people are expected to participate.

Sanders, who helped create CleanTech San Diego with other regional leaders, says a lot of conferences and conventions come to town, but this one brings the promise of future collaboration with international players that see the potential of doing business with the 750 local companies that are estimated to be working in the clean-tech space.

“They want to be where a critical mass of innovators is located,” explained Sanders, who helped launch the CleanTech organization as a way of growing the local economy. The City of San Diego partnered with UC San Diego, San Diego State University, the San Diego Regional Economic Development Corp. and Connect to give a focus to clean-tech activities, which have been operating under the radar for the past decade.

“We just put a name to it,” said Sanders, adding that the region is already seeing the benefit to the economy of clean-tech operations at a challenging time for other industries. He says the convergence of brainpower, entrepreneurial spirit, money from investors and “the public will” positions the region to be competitive and collaborative at the same time.

Clean-technology is one of the bright spots in this uncertain time, says Sanders, referring to companies — such as law firms, accounting firms and real estate vendors — seeing the benefit of providing resources to both startups and established players.

He says the emergence of green technology initiatives, some of them in the very early stages, also provides opportunities for old-line industries, such as construction, to learn how to re-tailor business practices and approaches to help clean-tech companies expand.

“It just makes good business sense,” said Sanders, adding that CleanTech San Diego also has “teeth” by virtue of receiving clean renewable energy bonds, which have the potential of ramping up solar installations on public buildings, courtesy of the federal government.

Last year, CleanTech led a campaign for the region to receive $157 million — out of $800 million allocated nationwide — for the installation of solar panels on municipal buildings, says Lisa Bicker, the trade association’s president and chief executive officer.

“We are the convener, the connective tissue that works with our partners to identify the opportunities and ask their participation,” said Bicker, describing the facilitative nature of the organization.

Included in the 2009 tally was the capture of a $4 million grant that addresses another key part of the clean-tech challenge: having a skilled and ready work force. In concert with local community colleges, the initiative, which includes partners such as Biocom, the EDC and the San Diego Center for Algae Biotechnology, will devise a curriculum in the next 24-36 months to train workers in the emerging biofuels segment.

CleanTech has charted the economic impact of the “very early stage” algae industry in the region. “Two years ago, Sandag (San Diego Association of Governments) conducted an economic analysis that showed over 300 people employed, and companies already contributing over $100 million to the economy,” said Bicker, referring to a company such as Sapphire Energy Inc., which relocated its business from the Bay Area to San Diego to be in striking distance of San Diego’s research facilities.

With more than 50 research institutes in the region, the algae cluster companies can grow their technologies and access private sector funders, says Bicker. Proximity to the Imperial Valley is also a key driver for algae commercialization.

Agricultural land can be re-purposed to help grow this new industry, which now numbers 30 companies in the area, says Bicker.

While new innovations like the algae-to-fuel cluster are coming to the fore, the solar sector still generates a lot of time, attention and money.

“I think solar will continue to be strong,” said James Waring, chairman of the CleanTech board of directors and a staff member of Sanders when the initiative was launched.

Of the 750 clean-tech companies identified in San Diego, one-third operate in the solar realm, Waring estimates. “There’s more photovoltaic rooftop installations here than any other city,” said Waring, who believes that the next big innovation in the solar economy is around the area of storage. “Our universities and private sector partners are aggressively pursuing new technologies so solar can have greater capacity.

“Even though it’s a mature industry sector, there is a lot of innovation around its future potential.”

New to the Area

Looking to grow business opportunity locally is a new player to the market: Concentrix Solar Inc.

Strengthening its presence in the U.S. market for solar power plants, concentrated photovoltaic system maker Concentrix, a subsidiary of a German-based solar equipment manufacturing company, recently opened its U.S. office in La Jolla. The company has hired industry professionals to staff the local effort and won listing from the California Energy Commission.

“Our target utility customers have been very impressive in their renewable energy generation,” said Crawford, noting that the five-person office will double in size during the next couple of months as sales calls and demonstrations begin in earnest.

Crawford is impressed with the CleanTech agenda. “They’ve really done an amazing job of pulling together academia and the wider business community, so there is collaboration here that doesn’t exist at the same level in other parts of the U.S.

“They have provided amazing introductions for us to the San Diego business community.”

The International Showcase will include the U.S. launch of the Global Cleantech Cluster Association, a partnership consisting of more than 20 of the world’s leading players. More information about the event can be obtained at CleanTechSanDiego.org.

Sanders says he recently spoke at the Brookings Institution, one of the nation’s oldest think tanks, along with several other big-city mayors looking to grow their economies with innovative industries and retooling existing ones.

“San Diego innovators have proven themselves in high-tech, communications, biotech, medical devices and more,” said Sanders, who believes there is a dynamic here that will help drive clean-tech’s continued growth, business expansion and creation of high-paying jobs.

“The same drive, talent and creativity will serve clean-tech innovators well in the next great business frontier: technologies built around sustainability.”