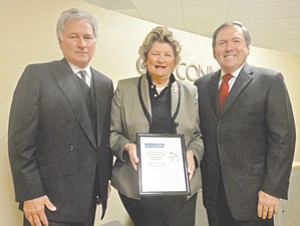 The federal government recently recognized Connect — the local program for nurturing young, technology-based businesses — as a force for economic development.

An arm of the Commerce Department announced Oct. 25 that Connect received one of its Innovation Awards. The homegrown San Diego nonprofit, which celebrated its 25th anniversary this year, is one of four standout economic development organizations from around the nation to get the honor.

“This is an award for accomplishment — not just for good effort, for trying hard,” said Mary Walshok, the UC San Diego administrator who oversaw Connect as a university program for the first 20 years of its life. Connect shed most ties with the university in 2005.

The cluster concept has become popular in Washington, D.C., particularly with the Obama administration, Roth reports. “Connect is a name that’s very well-known in Washington,” he added.

Connect is a locally created institution first developed by Bill Otterson, who died in 1999. The organization links people who make discoveries in research institutions to sources of capital and mentors in the business world.

Frequently the people who can discover new technologies are not the people who can successfully take them to market. “Connect is kind of in the middle there,” said David Hale, who is chairman of Connect, chairman of Hale BioPharma Ventures LLC and chairman of several area biotech companies. Hale is one of the pioneers of San Diego’s biotech scene, having been CEO of Hybritech.

Following its founding in 1985, Connect helped pull San Diego out of the economic doldrums and diversify the local economy. Hale recalled coming to town in 1981, when the two biggest employers were tourism and the military.

Today, the technology industry offers well-paying jobs to San Diegans. Some 6 percent of jobs in the area are technology jobs that generate 25 percent of local wages, according to Camille Sobrian Saltman, Connect’s chief operating officer.