Darlene and Donald Shiley have gifted the joint The Old Globe and University of San Diego Master of Fine Arts in Dramatic Arts program $500,000 to endow the Craig Noel Distinguished Professorship in Graduate Theater. Craig Noel, founder of The Old Globe theater, received the news days before his death April 3. The Shileys initially established The Old Globe/USD Master of Fine Arts program with a $1 million endowment. With this gift, the first endowed professorship has been established. “We are honored that the Shileys have chosen the renowned Old Globe/USD program to honor their beloved friend, Craig Noel,” stated Mary E. Lyons, USD president … Dr. Robert Singer received the Distinguished Service Award for plastic surgery leadership. The award is presented by The American Society for Aesthetic Plastic Surgery. The award is presented to an ASAPS member who shows exemplary leadership, service, creativity and dedication to the subspecialty of aesthetic surgery. “Dr. Singer has raised the bar for all of us in so many areas, including 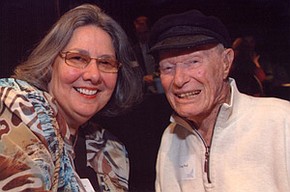 Darlene Shiley, shown above with the late Craig Noel, joins her husband in providing a $500,000 gift for a theater professorship in Noel’s name.

clinical excellence, patient safety and commitment to aesthetic surgery,” said Dr. Felmont Eaves III, president of ASAPS … San Diego Rotary Club presented the Four Avenues of Service Award to Rotarian Chuck Pretto, vice president of The Kobey Corp. Pretto is only the second person to receive this award in the past decade. The award is presented to a person who has consistently demonstrated support of the Object of Rotary through participation in service activities in each of the Four Avenues of Service: Club, Vocational, Community and International … On May 21, Ocean Minded sponsored Backyard Collective hosted by ConservationNEXT, a program of The Conservation Alliance. The event was held at the Escondido Elfin Forest Recreation Reserve. The event, hosted by The Escondido Creek Conservancy, supported park restoration and trail maintenance through trail maintenance and vegetation management … Karl Strauss Brewing Co. hosted its seventh annual Beach to Brewery Beer + Music Fest on May 8. The event raised $13,000 for the local chapter of Surfrider Foundation. Karl Strauss also supported Surfrider’s “Rise Above Plastics” campaign by eliminating the use of 17,000 plastic cups during the event … Sharp HealthCare Foundation and Sharp Rehabilitation Services honored five individuals with the Eagle Spirit Award, symbolizing the Navajo sign of the most potent healing power, at the 20th Annual Victories of Spirit held June 4 … The San Diego chapter of Achievement Rewards for College Scientists celebrated its 25th anniversary May 23. ARCS has given scholar awards of $7 million to more than 400 scholars attending UC San Diego, San Diego State University, The Scripps Research Institute and USD … The Beach & Country Guild of the United Cerebral Palsy of San Diego County held its inaugural Ladies Spring Golf Classic on May 10 at the Santaluz Club. The VIP guest of honor was Tina Michelson. The $45,000 raised supports programs and services to assist children and adults with disabilities to live, work, play and go to school in their community independently … The Fifth Annual Arts & Tea Celebration benefiting Home of Guiding Hands was held May 15 at the La Mesa Community Center. This year’s theme was the “Mad Hatter Tea Party” and raised more than $9,000 … Southwestern College received a $25,000 grant from the Coeta and Donald Barker Foundation for the Nursing and Health Occupation Program. The grant will provide for four full scholarships to the associate degree nursing program as well as other scholarships … The 29th annual Moores UCSD Cancer Center Celebrity Chefs Cook Gala was held May 15 at the Sheraton San Diego Hotel & Marina. The event raised $350,000 to help fund cancer research.