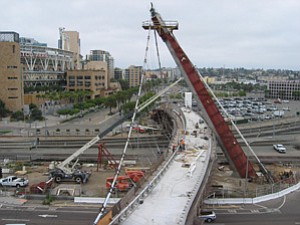 Work on the Harbor Drive Pedestrian Bridge is expected to be completed by November.

San Diego — A pedestrian bridge next to Petco Park that cost more than double its original estimate will take nearly double the time to complete construction, but project officials say it will be well worth the wait.

The delay in finishing the work is a consequence by all those involved on ensuring that the job is done correctly, and that the Harbor Drive Pedestrian Bridge is ultimately safe, said Joe Tognoli, the project engineer from the contracted firm T.Y. Lin International of San Francisco.

“A project like this might take a little longer, but in the grand scheme of things, that’s not an issue. The real issue is that we make sure that we have a quality product,” Tognoli said.

The bridge was approved by the city in April 2008, and started construction in October 2008. City officials said then that the work would take about 15 months to complete.

But Derek Danziger, spokesman for the Centre City Development Corp., the city agency overseeing the project, said the initial deadline was far too ambitious, given the complexity of the work involved.

He cited issues involving coordination of work schedules with several railroad companies that operate tracks beneath the bridge, as well as getting engineering issues related to recalibrating suspension cables that took more time than what had originally been estimated.

Danziger said the project is about 70 percent finished and should be done by November. Tom Buetler, the project’s supervisor for Pomona-based Reyes Construction Inc., the lead contractor on the bridge, refused to answer any questions, saying it was illegal for him to do so.

The 530-foot-long bridge that traverses Harbor Drive just south of the San Diego Convention Center at Park Boulevard was mandated by the California Public Utilities Commission to ensure the safety of people crossing the road between the Hilton San Diego Bayfront hotel and Petco Park.

When the bridge was first proposed, the cost estimate was nearly $13 million, but higher costs for construction materials such as steel, and a complete redesign to create a landmark image at a main entry point to the city caused that estimate to more than double to $26.8 million.

“It’s an expensive project, no question about it, but was designed to be an iconic project to last 100 years,” Danziger said.

Jimmy Parker, executive director of the Gaslamp Quarter Association, a nonprofit trade organization that promotes the shopping, dining and entertainment district, said although the bridge is coming in late, it’s finally being completed and should provide some boost to the overall downtown experience.

“I don’t know how it will affect the Gaslamp but at least it will remove some of the heavy traffic along Fifth Avenue,” Parker said.

The project will also benefit the downtown area because it will create a link from Balboa Park to San Diego Bay that has been a vision of city leaders for many years.

The key feature distinguishing the bridge is that it utilizes self-anchored suspension, rather than the traditional suspension bridge system with two anchors on either side. The main support pylon is a tilted steel beam 130 feet high.

The stringing of the bridge’s suspension cables is set to begin next week and should take a few weeks. Once that cabling is completed, the bridge will be effectively finished. All that is left is the work for hardscape and landscape improvements on both sides of the bridge, Tognoli said.

Another interesting aspect for the pedestrian bridge is its financing, some of which comes from private sources. Because it directly benefits the ballpark, San Diego Padres co-owner John Moores’ JMI Realty contributed $4.9 million toward its cost. The largest funding piece, for $11.1 million, came from CCDC. Other payment sources were the California Transportation Commission, $6 million; the Federal Highway Administration, $2.8 million; and the State Transportation Improvement Program, $2 million.

While work on the bridge has taken longer than originally anticipated, the costs have not risen substantially, Tognoli said.

The bridge is nearing completion at a good pace, but won’t get done as quickly as some may have envisioned, he said.

“It’s a complex project and a unique project, and often these types of projects take time,” he said.