A new report by the local office of brokerage firm Cassidy Turley BRE Commercial notes that of all U.S. regions, the West accounts for the largest share of nationwide commercial property loan distress.

But San Diego County apparently shares little of the blame, according to the report released Aug. 12.

Citing data from researchers at Real Capital Analytics, the brokerage firm notes that Western states — including California, Oregon, Washington, Nevada and Hawaii — had about $58 billion in commercial loans in some type of distress at the end of July.

Of that amount, 30 percent — or nearly $17 billion — was recorded in Las Vegas. The San Diego metro area contributed just 3 percent, or about $1.9 billion. Los Angeles was the only market besides Vegas that accounted for a double-digit percentage share of West Coast distress — at 15 percent, or $8.5 billion.

After the West, the most distressed region is the Southeast, followed by the Southwest, Midwest, Northeast and Mid-Atlantic, according to Real Capital Analytics. 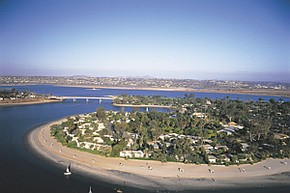 Mission Bay Resort Has New Manager: Colorado-based Destination Hotels & Resorts is the new operator of the 462-room Paradise Point Resort & Spa in San Diego, the company said in an Aug. 11 statement. The property is owned by LaSalle Hotel Properties and located on a 44-acre island on Mission Bay.

Financial terms of the management deal at Paradise Point were not disclosed.

Michael D. Barnello, president and chief executive officer of LaSalle Hotel Properties, said in the statement that Destination Hotels was chosen for its “ability as a proven operator of independent upscale resorts” and its expertise in the group-booking and leisure markets. 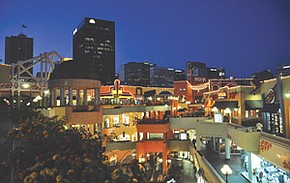 Horton Plaza Marks 25th Birthday: Much of the bustling activity in downtown San Diego’s Gaslamp Quarter was kick-started 25 years ago by the opening of what is now known as Westfield Horton Plaza.

The center, which was developed as an open-air plaza by Hahn Co. and opened in August 1985, is now owned by global mall operator Westfield Group. It is named after Alonzo Horton, a prominent real estate developer of the 19th century who played a pivotal early role in shaping what became San Diego’s downtown.

Westfield this month is celebrating the center’s quarter-century mark with historical and architectural tours, among other activities. Complimentary, docent-led tours are being held every Saturday during August, from 1 to 3 p.m. RSVPs are required, by e-mailing hortonplaza@westfield.com.