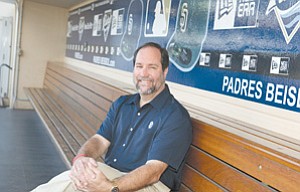 Jeff Moorad, CEO of the San Diego Padres, is looking to buy the Portland Beavers and move the team closer to San Diego.

Escondido is in the middle of an approval process to build a professional baseball stadium for the relocating Portland Beavers Triple-A team. The San Diego Padres’ top minor league affiliate is in the process of moving from Portland, Ore., and Jeff Moorad, the chief executive officer of the Padres, is looking to purchase the franchise and bring it closer to the San Diego area in the next couple of years.

Sounds to me like a simple process. However, like most things today that include public and private deal making, getting through the complications seems to be the biggest hurdle to clear. In this case, the financing of the stadium and its benefits are the main points of discussion. Additionally, there are some unique twists and turns.

The web they are weaving is not the traditional “should we or shouldn’t we get involved?” type. The election of a new mayor in November — replacing 12-year veteran Lori Holt Pfeiler, who is championing the project — pits the three rivals for her job against one another as the baseball issue now becomes a game of political football.

Pfeiler wants the project to move to completion. Dick Daniels, who Pfeiler supports, agrees with her in wanting to further the project. Sam Abed favors all kinds of economic development, but is playing a wait-and-get-more-info game as he thinks the deal favors the Padres too much. The third candidate, Tom D’Agosta, is generally opposed, as he feels it is the wrong use of redevelopment money.

Part two of the web is the entrance of consultants into the decision-making process. The city of Escondido has retained Charles Black to assist in negotiating terms with the baseball team. His name might be familiar from his role in brokering the deal for Petco Park. He is also on retainer with the city of San Diego to work on the new City Hall project, as well as the expansion of the Convention Center on the waterfront.

The second big-name player is Branch Rickey Jr. He is the grandson of Branch Rickey, the Hall of Fame baseball executive who broke the color barrier by contracting Jackie Robinson. He also created the baseball farm system currently used to groom young players for the big leagues. Branch Jr. is the current president of the Pacific Coast Baseball League. (The Portland team being considered in this deal plays in that league.) He has given his approval to play the Beavers’ home games at a separate stadium until the new digs are done.

The third name is Gary Jacobs, oldest son of billionaire Irwin Jacobs. Gary is the owner of the Lake Elsinore Storm, a Single-A minor league team. Gary has offered to let the Portland team play its home games in his stadium, The Diamond, while the new stadium is built.

The obvious question surrounding a sports stadium is, “What impact will it have on the local economy?” Well, pro team thinkers say a lot. Naysayers always say it is a burden to the region.

Well, if you ask the residents of Oklahoma City what they think, they will tell you that their sports stadium triggered a wide spectrum of development. They have surrounded their stadium with a shopping and tourism district called The Bricktown. Reno, Nev., saw high-end restaurants, retail stores and a new casino.

I have been a resident of Escondido for more than 25 years and I am all for this project proceeding. The city has built a performing arts facility, authorized a new Marriott hotel next to the art center, built a power plant and huge micro-brewery, and is building a huge hospital and a slew of restaurants. The ballpark would bring even more new business to the area and get rid of countless blocks of blighted landscape.

In conclusion, I admit there is risk in the $45 million project being built solely by the city. But with economic development on the upswing, why not put the best possible deal together, get an agreement and bring to fruition a key element in the “new Escondido”?

Ted Owen is president and chief executive officer of the Carlsbad Chamber of Commerce.