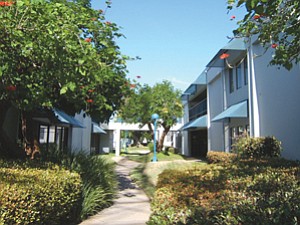 San Diego County has one of the nation’s largest concentrations of biotech firms — more than 500 companies generating an estimated $9 billion impact on the local economy. But its size couldn’t overcome what was a lackluster second quarter for the sector when it came to property leasing activity.

Total availability — essentially vacant or unused space in the biotech centers of Torrey Pines, the University Towne Center area, Sorrento Mesa and Sorrento Valley — stood at 13.87 percent at midyear, remaining stationary from 13.96 percent at the close of the first quarter.

The report cites a global economic downturn, which has forced biotech companies to do more with less during the past two years. However, a recent rise in local biotech venture capital funding could spur a boost in leasing activity in the coming months.

Also, some larger lease transactions remained under negotiation during the second quarter and are expected to close in the second half of 2010.

And like several previous reports by other expert real estate trackers, CoStar finds that the San Diego metro area’s multifamily property market is among the strongest in the nation.

Maryland-based CoStar, which has local operations, released a report Aug. 4 listing San Diego at No. 10 among U.S. metro areas in the multifamily category, covering primarily apartment buildings. San Diego makes a list that features New York City at No. 1, with Los Angeles coming in second and San Francisco placing sixth.

While the local office, industrial and retail markets didn’t crack the top 10 in CoStar’s repeat-sales rankings, the San Diego County investment climate for apartments has tracked consistently strong in other national reports, with occupancies remaining high amid a limited supply of existing and in-the-pipeline apartments relative to demand.

The CoStar report doesn’t list figures for individual cities, but says the top 10 markets for multifamily saw repeat-sale prices drop 0.4 percent during the latest quarter, compared with a 4.8 percent drop for the U.S. as a whole.

CoStar says tracking price changes on individual properties provides a more accurate gauge of a real estate market’s health than studies that calculate average or median sales prices, since the mix of properties available for sale is always changing.

From May to June, the national commercial repeat sales index, with all property types figured in, was down 7.78 percent, though the decline was just 4.83 percent for investment-grade property. In the past 10 months, the index has “oscillated from positive to negative and back again,” CoStar reported.

Debt distress has recently been weighing down prices on repeat sales. Nationwide, distressed sales as a percent of transaction volume are highest for hospitality (35 percent), multifamily (28 percent) and office properties (22 percent), researchers said.

Office Campus Will House Local Church: The Korean United Methodist Church of San Diego has purchased a local office campus, which it will renovate to house church offices and programs.

“They plan to construct a sanctuary, offices, a children’s center, and a community center with a kitchen to serve their local members,” said Harry Stone, a Voit agent who represented the seller, Kearny II LLC.

Stone said the church “anticipates conducting extensive redevelopment” of the property, located between Interstate 805 and state Route 52. The purchase was financed partly with a first-mortgage loan for $3.5 million from the United Methodist Development Fund.

The seller was The Realty Associates Fund VI LP. The business park was acquired through a 1031 exchange involving the sale of a lot in H.G. Fenton’s Fenton Technology Park in Sorrento Mesa.