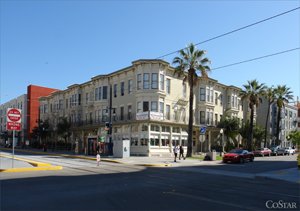 The Palms, a 121-year-old hotel in downtown San Diego, was recently sold after being foreclosed on by its lender earlier this year.

There’s still plenty of financial distress in the U.S. commercial real estate market, and a continuing “pretend and extend” approach by many lenders who haven’t pulled the trigger on borrowers behind on payments.

But industry observers say there are also signs of a brightening picture when it comes to commercial lending. A recent report by the brokerage and research firm Marcus & Millichap, which has a San Diego office, notes that constraints on commercial real estate lending eased during the first half of 2010, and the trend should continue as more lenders re-enter the securitization market.

For instance, investors such as life insurance companies are pursuing a broader range of deals. Even though U.S. commercial mortgage originations during the first quarter “remained depressed” relative to figures reported from 2005 to 2007, Marcus & Millichap says life insurers and other investment groups drove up commercial mortgage activity 12 percent from last year.

Even the loans funded through those dreaded commercial mortgage backed securities, or CMBS, deemed a major cause of debt problems over the past year, are being made more often as a component of transactions. Nationwide CMBS issuances reached $2.4 billion in the first half of 2010, approaching the $3 billion total for all of 2009.

However, that’s still a small fraction of the $197 billion annual average from 2005 to 2007, researchers said. While overall commercial lending is expected to increase this year, there are still risks of high and rising delinquency rates.

Gross activity — property leases and purchases — and net absorption through mid-2010 have increased, as office tenants take advantage of low rents in the better Class A and B spaces. Also, San Diego’s industrial market saw positive absorption in the second quarter, the first time that’s happened since the third quarter of 2008.

A July 21 company statement said the receiver has assumed complete operational responsibility for the project, including homeowner and leasing programs. Developer Carlyle/Galaxy of San Pedro opened Vue as a for-sale project in March 2009, but the building has been opened to leasing and rentals due to the difficult real estate economy.

Douglas Wilson is discussing and evaluating, with the lender and developer, a potential restarting of the luxury property’s sales program.

“This is the largest waterfront development in Old Town San Pedro, so we expect this asset to be a strong performer once the market has stabilized,” said Douglas Wilson, CEO of Douglas Wilson Cos., in the statement.

The local firm will work with the existing management team to maintain the property until it has a new owner.

Old Hotel Has New Owner: The Palms hotel in downtown San Diego, which property records show was built in 1889, was recently sold for $3.6 million.

The buyer of the historic 72-room hotel, located at 509 Park Blvd., was 12th & A Hotel Partners LP. According to public data and CoStar Group, the property had been taken over through foreclosure in February by Mission Federal Service Corp.

Now 121 years old, the hotel had last been sold for just over $2.3 in 2003. The recorded price at the time of the February foreclosure was $4.5 million, according to CoStar data.

REIT’s Dividend Streak Continues: Realty Income Corp., a real estate investment trust based in Escondido, recently declared a monthly common stock dividend of just over 14 cents per share. A July 20 statement from the company said the dividend is payable on Aug. 16, to shareholders of record as of Aug. 2.

The dividend represents an annualized amount of just over $1.72 per share, the company said. This is Realty Income’s 481st consecutive monthly dividend on its common stock in its 41-year history.

The company trades on the New York Stock Exchange. The statement said monthly income to investors is supported by cash flow from more than 2,300 properties, owned under long-term lease agreements with retail chains and other businesses.