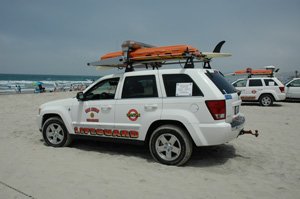 San Diego officials this fall will discuss allowing sponsorships on beach fixtures such as signs, benches and lifeguard towers. Past marketing arrangements permit sponsor names on lifeguard and other city vehicles.

“This day at the beach is brought to you by The Coca-Cola Co.”

Nothing like that is close to being posted on San Diego shorelines. But faced with a dire budget situation and seeking options to boost revenue, city officials this fall will be considering a proposal to allow corporate sponsorships at city-operated beaches.

Similar to programs already in place at beaches in Los Angeles County and the city of Huntington Beach, ads might appear in some form on fixtures such as signs, benches, lifeguard towers and trash receptacles.

The City Council’s Budget and Finance Committee voted July 14 to approve a proposed extension of the city’s existing corporate partnership marketing program, put forward by council member Carl DeMaio and supported by the mayor’s office. The measure was forwarded to the full City Council for further discussion.

San Diego officials say that during the next several weeks, there will be reviews with city attorneys to ensure that beach advertising does not conflict with sign and zoning laws, and a series of community meetings to hear the views of residents living near city-owned beaches.

“We don’t want people worried that their beach is going to be turned into NASCAR,” said Jenny Wolff, director of strategic partnerships in the office of Mayor Jerry Sanders. “We need to come up with something that the public is going to be happy with.”

San Diego, in 1999, became one of the nation’s first cities to enter into selected corporate sponsorship agreements to help bring in non-tax revenue and needed goods and services to support city operations.

Since its inception, the city’s corporate partnership program has brought in cumulative revenue of around $20 million — on average about $1.5 million to $2 million annually, Wolff said.

The most high-profile example is Qualcomm Stadium, where telecommunication technology firm Qualcomm Inc. paid for naming rights at the city-operated venue that is home to the San Diego Chargers.

In beach areas, Wolff said past partnerships have included arrangements where automakers and local car dealers have provided lifeguard and other operational vehicles and, depending on contract terms, also paid a marketing fee to have their names appear on them.

The city is currently in talks with several proposed partners to provide beach vehicles, following past pacts with General Motors and McCune Chrysler Jeep.

Wolff said extending the program to beach fixtures would mark the first time that the city would be offering sponsorships on static outdoor objects at several locations, visible to the general public on a daily basis.

The process would involve developing a request for sponsorship, including a summary of partnership opportunities and benefits of participation, followed by competitive bidding among those corporations that have expressed interest.

“We’ve mentioned this as a possibility for generating revenue, but getting the community’s input is going to be the most important part,” said Tom Aaron, deputy chief of staff to DeMaio.

“We need to hear what people have to say, because they’ll want to know that they’re not going to be faced with some kind of commercial Disneyland,” Aaron added.

Under similar beach-oriented programs developed elsewhere, Aaron said about 85 percent of the ad placement space must be devoted to a public service or informational message; with the sponsorship mention limited to around 15 percent.

Generally, he said residents want to ensure that sponsorship messages on beaches are discreet and unobtrusive, and don’t clash with the aesthetics of nearby residential and commercial districts.

Wolff said the design of signs and placards carrying sponsorships could vary throughout the city, and will likely be tailored to complement the adjacent neighborhood. Sponsors likely would be offered opportunities on a package basis, to minimize the number of signs and the quantity of separate sponsorships posted within the same vicinity.

In addition to beach ads, Aaron said DeMaio wants the city to consider offering sponsored informational kiosks in outdoor areas with high pedestrian traffic, such as the Gaslamp Quarter.

Aaron said kiosks could be modeled after a successful program already implemented in Dallas. That city’s kiosks feature public message and information boards on one side, with the sponsor’s mention on the other.

There are a few such kiosks in place locally, some with banks’ automated teller machines, around Balboa Park. But they might fare better as revenue generators in city areas with denser passerby traffic, Aaron said.