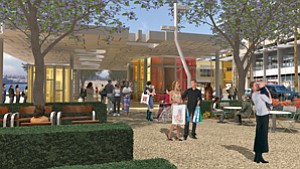 The California Coastal Commission has rejected the first phase of the North Embarcadero Visionary Plan.

San Diego economic development authorities are mulling their next move after the California Coastal Commission’s April 14 rejection of the first phase of the North Embarcadero Visionary Plan.

Had the coastal commission approved plans for the first phase, say local authorities, construction work likely would have started as early as December of this year. The actual startup is now in doubt for the first of what’s expected to be several phases in transforming the city’s northern waterfront district.

A long-term renovation, at an estimated cost of around $230 million, has been discussed and planned for the past 12 years. It would include public promenades, parks, and eventual commercial and residential elements.

The first phase, for which $28 million has been allocated, is focused on redeveloping a 1.5-mile area of Harbor Drive from Laurel Street to the G Street Mole.

Robert Valderrama, chairman of the Port of San Diego’s board of commissioners, says port officials are “extremely disappointed” by the Coastal Commission’s 5-5 vote, essentially rejecting the proposal.

The Coastal Commission told the Port it needed to amend its master plan for the development area and re-submit its application for approval.

But Valderrama says the next response is not clear-cut. Revising the master plan is likely a two-year commitment unless port staff can find a viable way to fast-track the process -- a difficult proposition in an atmosphere where the Embarcadero project has drawn vocal public opposition and a lawsuit.

Even when the concerns of opponents and coastal authorities are satisfied, there’s no guarantee that money intended for the first phase will be available. “The funding could end up going somewhere else,” Valderrama says.

“We are still committed to this project,” he adds. “Be we could get to a point in two years where the master plan is updated, but people are still opposed to it and it still doesn’t get the approval of the (coastal) commission.”

Fred Maas, chairman of the board of directors at Centre City Development Corp., another entity involved in Embarcadewro planning, notes that windows for financing renovations in the long term are gradually closing.

For instance, special districts created for funding improvements in the Columbia and Marina areas of downtown are scheduled to expire in 2017.

If the city remains entangled in issues regarding the first phase, Maas says government and development leaders may need to consider other uses for money set to be directed toward downtown improvements – such as putting it toward a proposed convention center expansion or smaller projects that don’t involve the same roadblocks.

“There are plenty of projects but limited dollars out there,” he said, calling the Coastal Commission’s decision “a very unfortunate thing” for the city.

“There’s a limit to how much we can be held hostage by the decisions of those who say they’re concerned about the waterfront but don’t live here,” he added.

This was the second time in two months that the project had gone before the Coastal Commission. In February, the commission directed port and coastal commission staffs to meet and work on details of special conditions that had been recommended by coastal officials.

A dispute over a planned public plaza at the foot of Broadway and Harbor Drive was among issues that prompted local activists to file an appeal with the Coastal Commission, challenging the Port of San Diego’s plans for the site.

Opponents contend the port district amended earlier plans calling for an oval park, shrinking it from 79,000 square feet to about one-fifth that size. Activists also said planned development favors cruise ship terminal improvements, at the expense of public views of the bay, and there were concerns about public parking spaces being eliminated.

The waterfront project, along with plans for a new cruise ship terminal on Broadway Pier, are also at the center of a lawsuit filed in August 2009 against the San Diego port district by Navy Broadway Complex Coalition, a local ad hoc group. A hearing on the matter is scheduled for June 25, according to San Diego County Superior Court records.

The oval park, originally envisioned at the foot of Broadway Pier, was redesigned for a different area to accommodate the new cruise ship terminal. The Coastal Commission asked port authorities to amend the project to include space for the alternative park, and port staff have proposed three alternative locations.

The North Embarcadero Visionary Plan is a joint project between the Port of San Diego, Centre City Development Corp. and the City of San Diego. Supporters said the first phase of construction would have generated about 400 local jobs.

“Let’s look at what this project would have brought: A promenade along the water, colorful trees and landscaping, and public restrooms,” said Charles Wurster, president and CEO of the port, in a statement responding to the coastal board’s vote.

“The project also would have provided environmental protection through a system that prevents polluted runoff from entering San Diego Bay,” he said. “It’s a sad day for the port, the city and the public we serve.”