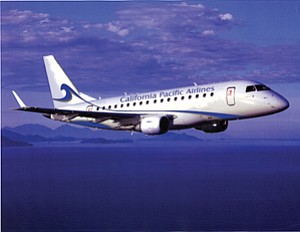 A sign of the emerging economy was showcased March 3l with the unveiling of a brand-new regional aircraft company, California Pacific Airlines.

The company plans to begin operations in the fall of this year or early 2011, depending on receipt of the required government operating orders for flying out of Carlsbad’s McClellan-Palomar Airport.

Not since the debut of Pacific Southwest Airlines, which ceased operations in the mid-1980s, has a San Diego County-based airline provided nonstop service to major destinations in California, Arizona and Nevada. At the outset, the plan is to fly to Sacramento, San Jose, Oakland, Las Vegas and Phoenix. The second phase would include weekend sojourns to selected cities in Mexico.

The owner and creator of the new company is Ted Vallas, who by most standards could be called one of the most successful serial entrepreneurs in the region. He began in the ’50s by buying El Camino Country Club in Oceanside and transforming it into the first facility of its type. It was the venue for the first West Coast PGA tournament.

In 1984, he designed and built the Olympic Resort in Carlsbad to service his Air Resorts, which operated a scheduled airline from Carlsbad to several cities and states in the West.

A tireless entrepreneur, Vallas loved golf and travel, but his heart had always been in flying. The airline he owned in the ’80s just seemed to whet his appetite. Over the years, the desire to own another, even bigger and better airline was alive in the heart of the 88-year-old.

March 31 was the day he finally realized his lifelong dream of owning another airline. At an evening reception at one of his first properties, El Camino Country Club, he announced the advent of California Pacific Airlines.

Late this year, the first flights should commence to California, Arizona and Nevada in shiny, blue and white, twin jet engine Embraer 170 aircraft. The 70-seat planes (five at first) will signal a significant turnaround in the air service on the West Coast. Built by Brazil’s Embraer S.A., it will be the quietest jet aircraft (Stage 4) to fly out of Palomar Airport. Fully loaded, the plane will be able to use the existing runway length.

There are plans to extend the runway by 1,100 feet, but the Vallas aircraft will not need to wait for the construction. The construction will take years to move through the planning and approval process, and Vallas has asserted that, at 88 years of age, his clock is running down, and he wants to realize his dream.

In addition to being ultra quiet, the planes have a flying range of 1,550 miles and a three-class seating configuration. The planes will have six first-class seats, 16 business-class seats, and 48 economy-class seats. They will have two seats on each side, with no middle seats. Stay tuned; as soon as the government permits are secured, seats on these planes will go on sale.

In other North County news:

• Carlsbad-based ViaSat Inc., a satellite equipment manufacturer, has announced a new $21.5 million order for modem terminals from the U.S. Navy’s Space and Naval Warfare Systems Command, or SPAWAR. The equipment will be used by all the armed services and provide a digital view of battlefields.

• A round of thanks to the employees of Tri-City Medical Center in Oceanside for participating in the annual March of Dimes’ March for Babies by pledging to donate a minimum of $35,000. More than 200 employees on 27 teams were expected to participate and raise the money at the April 10 event. The current CEO of Tri-City Medical Center, Larry Anderson, is a polio survivor and credits the work done by the March of Dimes for saving his life as a child.

Ted Owen is president and CEO of the Carlsbad Chamber of Commerce.