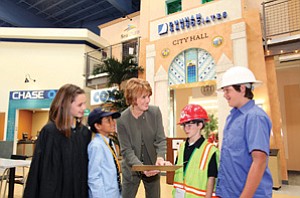 San Diego — Joanne Pastula and her staff and army of volunteers at Junior Achievement of San Diego and Imperial Counties Inc. are not just grooming the next generation of workers; the nonprofit organization is also working to assure that young people have strong financial skills and are prepared to compete in an increasingly competitive economy when they enter the work force.

“One of the fastest growing groups of bankruptcies is young people 18 to 25 because they don’t understand basic finance,” said Pastula, JA’s president and CEO. “Most people are not educated about the critical things that will keep them solvent. One of the things we do is open kids’ eyes to what’s possible for their financial future. We want them to maximize their personal capabilities. It’s for all kids — those in low-income households, in high-income situations — everybody needs this. That is the reason I get so excited. This is an essential part of everyone’s life.”

In its 60th year, Junior Achievement, which serves San Diego and Imperial counties, has 24 different programs available to children from kindergarten through high school. Each year, most of the JA curriculum is taught on-campus in school classrooms by more than 1,500 volunteers. The organization is supported by more than 2,000 local companies, individuals and foundations, and has 50 active board members who give their time and expertise in support of the JA mission.

One of JA’s most popular on-site programs is The McGrath Family JA BizTown, which encourages students to learn about the free enterprise system through active participation in the daily business of a simulated town. Student experiences vary from working at a bank, a television station, or a retail store, to managing personal finance such as writing checks and accounting. With a variety of hands-on activities, students realize the relationship between what they learn in school and their successful participation in a simulated economy, Pastula said. BizTown also provides teachers with a new approach to teaching economics. At the same time, parents are given an opportunity to actively participate in their children’s learning as program volunteers. The local JA’s BizTown, a 6,000-square-foot, two-story replica of a town square, is one of 30 around the world and the only one in California.

“The kids are absolutely engaged in here,” said Pastula as she walked down one of the BizTown “boulevards.” “I love the fact that we have the privilege of showing kids ways they can reach their own potential and achieve their own dream. What an awesome experience this is.”

Through BizTown, students learn about various careers; what it takes to run a range of businesses and how to be responsible consumers. After all, Pastula said, financial literacy is a critical component of this nation’s survival.

“One of the statistics is that one-third of the kids in our nation who start eighth grade will not graduate high school,” she said. “That is a sobering statistic. One of the reasons why JA starts so early is we know young kids have an open mind; by the time they get to high school it’s too late. By the time they get ready to graduate from high school they have to know what kind of classes they need to take and have career options laid out for themselves. They also need to know what careers are out there. A lot of the careers our kids are going to experience have not been invented yet. We are teaching them to be lifelong learners. Not all of them will go to college, but they have to know they have to be willing to learn. We are also very big on entrepreneurship. We want our kids to create some of the businesses that will employ people.”

Pastula said JA, which has a $2 million annual budget, relies heavily on business and community support. The organization has so far raised $6.6 million of its $7.8 million capital campaign, which paid for its building, BizTown and minor tenant improvements. JA also has two fundraisers a year, including a Bowl-A-Thon, in which participants raise pledges and bowl together as a team. In 2009, more than 3,000 bowlers from 50 companies raised more than $318,000.

Another JA fundraiser is the Business Hall of Fame, which honors three business people who exemplify business and personal success and who are great role models for kids. JA is currently searching for all alumni who went through its programs to be honored at an alumni event at the University Club Atop Symphony Towers in downtown San Diego on June 8.

Pastula said companies strongly support JA because the organization is a critical link between business and education.

“Business understands that we like to develop our own work force here,” she said. “We have a challenge finding qualified workers like engineers. We want to develop homegrown talent; we like to keep people here. Companies want to have a good work force.

Getting Every Business Involved

“Companies are focused on wanting to help change the world in a positive way,” Pastula added. “Nothing’s more fun than JA.”

Junior Achievement (originally called the Boys’ and Girls’ Bureau Committee) was founded in New England in 1919 when a group of high school students met after school with a business volunteer to make products and form companies around them. Some of the first projects included a golden hanger made with aluminum, jewelry, a floatable emergency light, and a clock. The JA company program still exists today.

“The goal for our organization is to reach every child in San Diego and Imperial counties — that’s over 500,000 kids,” Pastula said. “The way we are working toward that is by getting every business involved. It takes the business community to really be involved. We are really focused on getting companies to support us and to go into the classroom to share their stories and experiences.”

One of those business leaders is Marjorie Thomas, corporate controller for Sony Electronics Inc. in San Diego. Thomas, co-chair of JA’s board of directors and a volunteer, first became involved with the organization about five years ago while living and working in Idaho. She joined the local JA as a volunteer and a board member in 2007.

“I really believed in the curriculum,” Thomas said. “There is no other place that teaches basic economics, finance and entrepreneurship in our public school curriculum. As we have lived through this latest economy meltdown, I feel that general consumers are not educated enough of what they can afford and what happens during upturns and downturns. You have to ingrain the idea of how to manage finances and your money and how to take a risk. We all have to take risks, but make sure they are educated risks.

“I would say that virtually every individual needs this type of education,” she added. “If you’re interested in moving up in your profession you will eventually be faced with having to understand financial terminology and income statements. This is a very critical element to anyone’s education.”

Thomas is also sold on the fact that JA gives local companies access to the future work force.

“About a year ago I volunteered at BizTown and helped a group of kids who were running SeaWorld. They came well-prepared for each of their jobs. I told them when they were 18 to apply for a job (at Sony). I was ready to hire all of them.”

Thomas gives Pastula credit for much of JA’s success. “She is an incredible leader and has a knack for drawing out the potential in a number of people,” she said.

Pastula’s first taste of JA was in the late 1970s when she taught high school students how to invest in the stock market. They invested $100 in Dr. Pepper Inc., Boeing and Disney. At one point, Pastula remembers the stock was worth $4,000.

Pastula was elected president and CEO of JA in 1999. Annual revenues that year were only $300,000. Since that time, she has expanded the student participation from 15,000 students to more than 30,000 students.

Before JA, Pastula was the director of volunteer services for the Girl Scouts San Diego-Imperial Council, and executive vice president of John Burnham & Co. Pastula, who earned a bachelor’s degree and secondary teaching credential from San Diego State University, has served as a board member for various organizations, including United Way of San Diego, United Cerebral Palsy Association, Downtown YMCA, San Diego State University Business Advisory Committee and The Business Roundtable for Education. Other community involvements include LEAD San Diego, San Diego Rotary, Mayor’s Commission on the Status of Women, Partnerships in Education and The Committee of 2000. She is a founding trustee and board member of The Thomas C. Ackerman Foundation and also serves on the boards of the San Diego Regional Economic Development Corp. and San Diego Grantmakers.

Pastula’s first job was at the age of 14 ½ when she worked behind the candy counter at a dime store in her hometown of Seattle. She worked 13 different jobs to pay for her education at SDSU, including as a banker and a waitress.

Pastula said her many career and educational experiences have prepared her for her job at JA.

“I have the unique opportunity to take something I was really passionate about, which is education, and my many years of practical business experience and I get to marry them,” she said. “We are really passionate about ensuring that every child has access to the economic and financial knowledge they will need in the future.”

Andrea Siedsma is a freelance writer for the San Diego Business Journal.