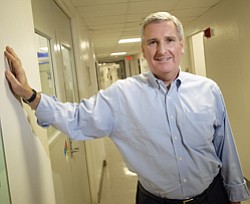 Novocell’s top executive John West says a recent $20 million loan from a state agency comes without the strings attached by banks or other traditional lenders. Photo by Stephen Whalen.

Stem cell engineering company Novocell Inc. has an ambitious goal. It aims to bring the first human embryonic stem cell therapy for diabetes into the clinic in just four years.

The California Institute for Regenerative Medicine, the distributor of $3 billion in state funding for stem cell research, pledged to loan the company $20 million to push early stage research into the clinic.

Novocell could see the money in the next three to six months, according to a CIRM spokesman.

For a small, privately held San Diego life sciences company, the grant comes without many of the strings attached to traditional bank loans or debt vehicles.

“Our only business is doing the development for this kind of product,” said Novocell CEO John West. “It’s not like we have another business that will give you the basis for a bank loan.”

Cash-burning California biotechs like Novocell see the state-run program as a major benefit since they don’t have to repay the loans until a product hits the market. If they never make it that far, which happens more often than not, the companies aren’t obligated to repay a cent.

Novocell aims to test an implantable device that delivers insulin-producing beta cells, which react to blood glucose levels, into the body. To start, West said he expects to funnel the loan money into preclinical research that would satisfy FDA requirements to begin human trials.

“Our interest now is to move from those research findings in mouse and rats into definitive preclinical research studies,” he said.

For the nearly 3 million Americans with type 1 diabetes, also known as juvenile-onset diabetes, stem cell therapy represents a promising new area of medicine that could reduce or even eliminate the need for daily insulin shots.

In 2007, diabetes accounted for $174 billion in health care costs, according to the American Diabetes Association. It estimated that 6 million people remained undiagnosed, possibly pushing costs even higher.

For decades, researchers have been seeking ways of replacing the insulin-producing cells of the pancreas that are destroyed by the patient’s own immune system.

Early last year, Novocell scientists proved they could coax human embryonic stem cells to become fully functioning pancreatic beta cells that secrete insulin in mice. The finding was important because the researchers showed they could mimic what happens in a healthy body: the pancreas secretes insulin when blood sugar levels are low. Some of the mice, however, developed tumors, something the company aims to study under a separate CIRM grant. Understanding why these tumors develop could help researchers avoid them in animal studies, an important step before they can test the therapy in humans.

“The question is ‘When will anyone have an absolutely safe product that is well-regulated, that can turn on when needed, that can turn off when needed and does not turn into a tumor?’ ” said Dr. Fouad Kandeel, who directs the diabetes division and oversees clinical trials at City of Hope in Los Angeles.

Much of the work at Novocell today centers on better encapsulation techniques, which aim to keep the stem cells from straying into other parts of the body.

“If you just inject cells into a body they’re likely to end up all over the body,” he said. “In our case, the fact that they can’t go anywhere, they can’t metastasize, gives us a lot of control over it.”

Kandeel says encapsulation techniques have yet to be fully proven since harmful toxins secreted by the pancreas can enter through the capsule’s holes.

“The encapsulation science can provide some limited protection to the islets but is probably not the full answer,” he said.

West maintains that Novocell could be ready to implant the cells into patients in just three years, but CIRM said a more realistic timeline is four years.

Eventually, West says, the stem cell therapy could eliminate insulin dependency in people with type 1 diabetes and eventually provide benefits to people with type 2 diabetes, which represent the majority of the 24 million people living with diabetes in the United States.

“Our sense is that type 2 diabetes would be a different challenge,” West said. “Other medical challenges don’t exist in the type 1 case.”