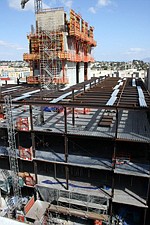 Despite construction delays caused by unearthed bones, the Thomas Jefferson School of Law being built in the East Village remains on schedule.

Officials with the Thomas Jefferson School of Law said they have reaped cost savings and remain on schedule for building a new law school in the East Village even after prehistoric findings stalled construction crews this summer.

Among other savings, general contractor Bovis Lend Lease used a new environmentally friendly concrete mixture that shortened its construction timeline by four weeks and saved $187,000 in material costs. The Hycrete technology, along with other elements such as a rooftop solar panel, could help the law school achieve its goal of becoming Gold LEED-certified, according to spokesman Chris Saunders.

The school, at 11th and Island avenues, is planned to replace its existing building in Old Town in time for the 2010-2011 academic year. In February, construction crews dug up the bones of an ice age Columbian mammoth at the site. A few weeks later, crews unearthed a whale skeleton 40 feet beneath it. In March, a third discovery surfaced: the bones of a giant sloth. The San Diego Natural History Museum plans to put the findings on display.

Time Clock Issue Not An Open And Shut Case: Labor and employment attorneys say an upcoming Supreme Court decision on wage and hour issues could impact business in a big way.

A ruling in the case of Brinker International, the parent company of Chili’s Bar & Grill, isn’t expected until next year, but attorneys say the case could signal major changes in the way employers deal with hourly employee meal and break periods.

“It’s a huge issue,” said George Howard, a labor attorney with Jones Day in San Diego. “Before Brinker came out and nobody knew what the law was, you had people literally going around disciplining people, threatening to fire them because they missed a break period.”

Employees of Brinker sued the company in a class action lawsuit, later denied class action status, alleging the restaurant violated state laws regarding meal and rest breaks. Among other claims, hourly employees claimed that they were not provided meal or rest breaks in accordance with state law.

The 2004 suit, filed in San Diego, came two years after Brinker agreed to pay $10 million to settle a suit by the state Division of Labor Standards over similar allegations.

Last July, an appellate court said employees are entitled to a 30-minute meal period for each work period of more than five hours a day. If an employee worked 10 hours, two meal periods would have to be provided at some point during the shift.

Most importantly, Howard said, the court decided each case stood on its own, freeing Brinker of a class action suit.

Court Hangs Out Closed Sign: The San Diego Superior Court went dark for the first time in history last Wednesday, the start of its once-a-month closures due to the statewide fiscal crisis and budget cuts to the court system. The California Judicial Council approved the unprecedented closures earlier this year.

Courtrooms and business offices will be closed on the third Wednesday of each subsequent month through June. The court is urging the public to visit its Web site, sdcourt.ca.gov, or call 619-450-7400 to handle traffic tickets or obtain court information.