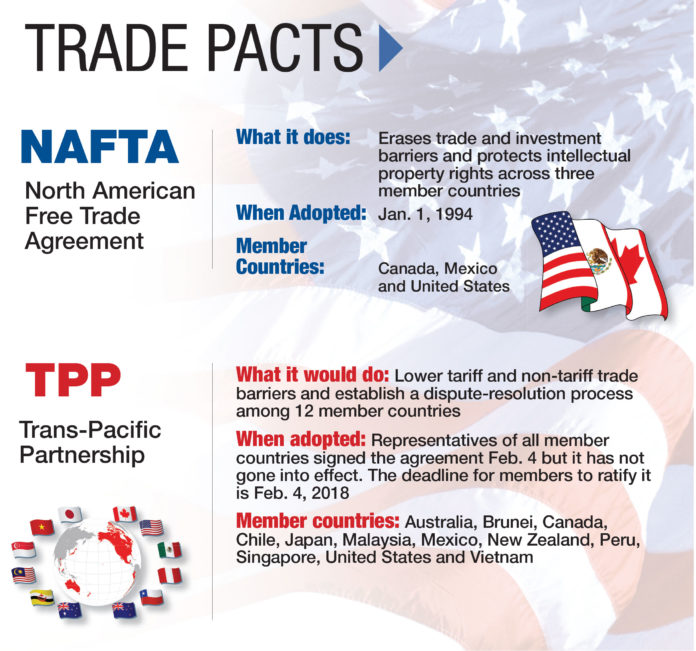 It was a day or two after the presidential election and someone at a local tile-maker was telling the head of the Otay Mesa Chamber of Commerce about the company’s plan to move forward with an expansion of its Tijuana manufacturing operation.

“I’m thinking, ‘Hmm. Clearly, we just don’t think it will happen,’” she said.

A lot of people don’t. Since the election, the big question for trade-heavy San Diego isn’t how painful it would be if Trump calls off or rewrites existing free trade agreements. It’s how seriously to take Trump’s campaign rhetoric on international trade.

“Even though he’s saying it, it’s hard for all of us to try to imagine it,” she said. “We would just lose competitiveness in the U.S. in general.”

It’s not just the fate of the North American Free Trade Agreement worrying local economists and business people. On the campaign trail, Trump dismissed the Trans-Pacific Partnership, an international accord promoted as greatly benefiting the San Diego region, especially in the areas of technology and biosciences.

Less back and forth

San Diego resident Greg Autry, an entrepreneurship professor at the University of Southern California, said Trump’s talk on trade was no joke.

“First of all, TPP is dead,” said Autry, whose 2011 book “Death by China” was co-authored by Trump economic advisor Peter Navarro.

NAFTA, Autry said, will be renegotiated in a way that will be “disruptive to the existing paradigm” in San Diego, in that there will less “back and forth” movement of goods across the border, more manufacturing on the U.S. side of the border and an increase in exports.

“If what you’re doing is importing cheap goods from across the border from Mexico, you’ll do less” business, he said.

San Diego economist Alan Nevin said Trump is too smart a man to drastically upset NAFTA, especially with the United States’ growing reliance on materials imported from Mexico and Canada.

“I’m quite certain that NAFTA will remain. It’s just too big a part of the economy,” said the director of economic and market research at San Diego consulting company Xpera Group.

Paola Avila hopes so. The vice president of the San Diego Regional Chamber of Commerce said local companies’ supply chains are so closely integrated with producers in Tijuana that ending NAFTA and imposing new tariffs on Mexico imports “would be like cutting off a leg.”

“I think President-elect Trump will be reasonable,” she said. “I think we are committed to working with the incoming administration to make sure that the real facts – and not, you know, campaign rhetoric, but real facts on the impact on the U.S. economy – (are) conveyed.”

No doubt Trump’s actions on NAFTA, and to a lesser extent, the TPP, could have a disproportionate effect on the San Diego economy.

The area is often said to enjoy a strong competitive advantage stemming from its proximity to Tijuana and maquiladoras along the border. Manufacturers here send materials south for initial work then bring them back into the United States for further refinement. Some local products cross the border a few times before being shipped to domestic and international customers.

The Washington, D.C.-based Woodrow Wilson International Center for Scholars predicted in September that 4.9 million Americans would be put out of a job if U.S.-Mexican trade were halted. No local figures on NAFTA-related employment were available.

“The United States and Mexico no longer simply sell finished products to one another,” the center’s report states. “Instead, they build things together, using a regional system of manufacturing production that involves supply chains that crisscross the U.S.-Mexico border. This allows the two countries to effectively combine their individual comparative advantages into an ultra-competitive regional system, improving North America’s ability to compete on the global stage.”

The University of California, San Diego’s School of Global Policy and Strategy released a study in August suggesting the area’s location and economic profile increase chances it will come out ahead if the TPP is ratified as proposed. Not only is the area’s large service sector insulated from international competition, it said, but intellectual property protections built into the agreement would give local technology exporters greater assurance their patents won’t be violated overseas.

During his presidential campaign, Trump labeled TPP “a horrible deal … that is going to lead to nothing but trouble.” He called NAFTA “defective” and “a disaster” that has killed U.S. jobs and helped create a $58 billion annual trade deficit with Mexico.

The president-elect said he would levy a 20 percent tariff on imported goods and raise it to 35 percent for cars and automotive parts made in Mexico. He called for abandoning the TPP, which has not been ratified by Congress, and “renegotiating” NAFTA.

But because he has offered few details about how he might try to change the accord put in place in 1994, and given no timetable on when any changes might occur, local business people disagree as to what may lie ahead.

Customs broker Eduardo Acosta said he doubts Trump would withdraw entirely from NAFTA, if only because doing so would lead to new tariffs on fruits, vegetables and other imported products popular among U.S. consumers. But he’s not against modernizing the trade pact or making minor changes.

Greg Hall has been taking a close look at how changes to NAFTA might affect the company he serves as CEO, corrugated cardboard box-maker Smurfit Kappa North America.

With extensive operations on both sides of the U.S.-Mexico border, the Dublin, Ireland-based company doesn’t sell boxes in the United States; it sells them to manufacturers in Mexico that use them to ship their goods north. Changes to NAFTA probably wouldn’t affect the company directly, but it could prompt customers to move to the United States or somewhere with lower labor costs.

Hall said Trump may insist any goods imported duty-free from Mexico contain a certain percentage of materials or products sourced from the United States. It’s only a guess, Hall emphasized, but that would ensure Mexico serves more as a value-added trading partner than a conduit for foreign products.

“That’s one way I think that the agreement could stay in place and yet meet the need stated by the new administration,” said Hall, who like other company managers lives in San Diego.

With that in mind, his best estimate is that Trump renegotiating NAFTA could have no impact on Smurfit Kappa or it could drag down business as much as 30 percent. Until more information becomes available, he’s forecasting a hit of between 10 percent and 15 percent in 2017.

Uncertainty about what parts of NAFTA Trump would change represents “the biggest unknown and risk of the president-elect’s economic policies,” Lynn Reaser, chief economist at Point Loma Nazarene University, said by email.

With the TPP on the “back burner,” she wrote, the main threat to the region’s economy – and that of Baja California – is any disruption to the flow of people, goods, services and capital across the U.S.-Mexico border.

There is a related danger that China, which is not a party to the TPP, will forge trade pacts with Latin American and Asian countries “with the U.S. probably left on the outside,” she asserted.

One comfort to be taken from Trump’s campaign statements it is that he once claimed to “love trade,” she stated.

“One can hope that he will embrace the fact that trade can be and is a ‘win-win’ solution for all, rather than a zero-sum game where only one party can win at the expense of another,” she wrote.