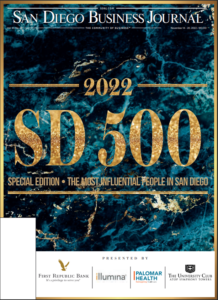 It’s been another eventful year for America’s Finest City – and the business leaders that power it.

The local business landscape, dominated for two years by concerns about COVID, had a new challenge in 2022 – inflation, which rocketed from 2 to 8% seemingly overnight. With prices for everything from food to gas suddenly surging, the Federal Reserve unleashed a string of aggressive rate hikes just as San Diego and the rest of the nation was emerging from the pandemic.

Fed rate hikes haven’t been this year’s only economic headwind. Many businesses also continue to be challenged by supply chain bottlenecks and a historically tight labor market. Higher interest rates have also put a damper on real estate’s record-breaking rise and forced many businesses to cut capex and pivot to a more conservative mode of operation. Some of the area’s biggest companies, including Qualcomm, are instituting hiring freezes while companies including Heron Therapeutics, Intuit and Bristol Myers Squibb have announced their first layoffs since the Great Recession.

As the economic pendulum swings, San Diego and Tijuana civic and business leaders continue to prepare to host the year-long World Design Capital 2024 international event, which will put a global spotlight on the region – and the growing cross-border collaboration happening between the two cities.

The new Burnham Center for Community Advancement, located at UCSD’s Park & Market Center in downtown San Diego, has been at the forefront of the bi-national efforts to stage the World Design Capital 2024. The Burnham Center was created by local icon Malin Burnham, who refers to his new organization as a “think-and-do tank.” Like Burnham, the Center’s CEO Tad Parzen is profiled in the SD 500 section that follows. And so is longtime UCSD administrator Mary Walshok, who oversaw the opening of the new Park & Market building.

And speaking of amazing achievements, the San Diego Padres have been one of the year’s biggest local success stories: The team’s stunning run deep into the MLB playoffs electrified the city in October – and at least for a couple of weeks, made San Diegans forget about $6-per-gallon gas. Padres Chairman Peter Seidler is another of the local luminaries featured in this year’s SD 500 Icons section.

In 2022, San Diego continued its transformation into a truly world-class city, powered by its booming biotech and life science sectors, the ongoing revitalization of downtown and emerging industries like cyber security and “blue” tech.

A number of the business leaders profiled in this special edition are playing key roles in those burgeoning sectors. This year’s SD 500 also features a host of new faces as well as business community leaders who’ve been mainstays on the list for more than a decade. And with DEI (diversity, equity and inclusion) continuing to be top of mind in 2022, women, persons of color and members of the area’s vibrant LBGTQ community also are well represented on this year’s list.

To compile the 2022 SD 500, the Business Journal tapped its veteran editorial staff and professional networks, grouping honorees by general categories or vertical markets, beginning with the region’s civic and business association leaders.

With the end of the COVID-19 pandemic, many area companies and organizations have tried to return to “business as usual” while others have been on the move.

This year, Scott Ashton, CEO of the Oceanside Chamber of Commerce, has helped guide a remarkable resurgence in that North County city as ‘O’side’ and its major new hotels and once again vibrant downtown have become a hot spot for both tourists and locales.

In August, Carlsbad-based Callaway Golf announced that it was rebranding as Topgolf Callaway Brands. The effort, led by longtime CEO Chip Brewer, saw the sports equipment company also change its stock ticker from ELY – for company founder Ely Callaway – to MODG – to reflect the company’s leadership position in the growing Modern Golf ecosystem. Callaway, which bought Topgolf for $2.8 billion in 2021, has yet to confirm reports the company plans to open a new Topgolf venue on Harbor Island.

At Aptera, also headquartered in Carlsbad, co-founders Chris Anthony and Steve Fambro continued to grow their groundbreaking startup, doubling the number of employees at their new production facility, which is and now slated to produce the world’s first commercial solar EVs in 2023. The aerodynamic three-wheelers, powered in part by an onboard solar panel, can go from 0 to 60 mph in three and a half seconds. Prices start at $26K.

Mark Stuart, CEO of San Diego Foundation, lead a rebranding of the organization that has granted more than $1.4 billion to area nonprofits since 1975. In mid-year, the foundation adopted a colorful new logo and dropped the “The” from its name. And in its latest fiscal year, SDF also hit a record for annual grant making, giving more than $150 million to area nonprofits.

Across town at the Conrad Prebys Foundation, another key player in the nonprofit sector, Grant Oliphant took the reins as the organization’s new CEO. Oliphant came to the foundation from Heinz Endowments in Pittsburgh, where he guided that prestigious organization for nearly a decade.

This year, Oliphant and Donna DeBerry, CEO of the Central San Diego Black Chamber of Commerce, partnered to co-chair the 2022 Cause Conference, sponsored by the Better Business Bureau Pacific Southwest and the San Diego Business Journal. The conference, directed by Larry Kesslin, another leader featured in this year’s SD 500, promotes interaction and synergy between area nonprofit and for-profit business leaders.

At the University of San Diego, President Dr. James Harris oversaw the creation and opening of the university’s new Knauss School of Business, made possible by a $50 million donation from area philanthropists Don and Ellie Knauss. Another SD 500 member, Dr. Tim Keane, is the business school’s new dean. Keane came to USD in 2019 from another prominent, private Catholic university, Regis College in Denver.

For San Diego’s booming tech and life science sectors, 2022 was a lot like 2021. Even as both the S&P 500 and NASDAQ sold off sharply in the first three quarters of the year, San Diego firms booked venture capital investments totaling more $2.3 billion across 87 deals just in the first half of 2022.

Earlier this month a report from CBRE confirmed that San Diego remains one of the country’s hottest commercial real estate markets, especially for tech and life science companies. The report, which noted that the local tech industry continues to “greatly influence” office markets despite slowing job growth, also identified San Diego as one of the “Top 5” markets in the U.S. – with the “best combination of future tech demand drivers and office market fundamentals.”

The same CBRE report noted Sorrento Mesa, home to many of the area’s life science and biotech firms, is the #4 submarket in the entire U.S. in terms of rent growth since 2020.

Joe Panetta, CEO at Biocom, another of the influential icons profiled on this year’s list, welcomed industry leaders from around the world in person again this past summer at his association’s annual Global Partnering Conference in Torrey Pines. Like many events impacted by the pandemic, the key life science industry conference was held virtually in 2020 and 2021.

Also in July, Biocom tapped Miguel Motta as its new VP of strategic operations and head of its San Diego office. Motta, a veteran life science executive, joins the newest wave of local leaders shaping San Diego’s community of business. Look for his profile in the 2023 SD 500.