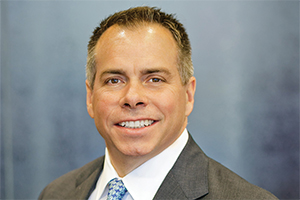 That company currently has no assets — other than its leadership. Instead, Corza will use money invested by Lucier and GTCR to buy up and grow promising companies in the medical device and biotech sectors.

“The way we anticipate it playing out, we’ll acquire a foundational asset. Once we have that, we will acquire further companies to build out the overall enterprise,” Lucier said. “The last few years in health care has been about selling companies. We think the next few years is going to be about buying companies.”

It might sound like a big risk, but GTCR has already launched 10 of these ventures, each successfully making an acquisition.

In San Diego, the private equity firm tapped former Gen-Probe CEO Carl Hull in 2014 to create diagnostics company Maravai Life Sciences. Since then, Maravai has acquired four companies, including Burlingame-based research equipment company Vector Laboratories, and TriLink BioTechnologies, a local company that synthesizes DNA and RNA molecules. The latter is moving into new offices in Sorrento Valley to expand its staff, and is opening a new 180,000-square-foot manufacturing facility.

“One of the ways we try to be a little bit different, is we put a huge emphasis on working with executives in areas where we invest,” said Ben Daverman, a managing director for GTCR.

The private equity firm first became acquainted with Lucier when he served on the board of Cole-Parmer, which was previously one of GTCR’s portfolio companies. GreatCall was also in GTCR’s portfolio, before the company sold to Best Buy for $800 million last August.

Before joining NuVasive, Lucier served as CEO of Life Technologies for a decade, where he helped grow the small, Carlsbad company into a large maker of life science products, leading to its acquisition by Thermo Fisher for $13.6 billion.

“Greg’s been very successful. He’s created a ton of value for shareholders at Life Technologies and at NuVasive.” Daverman said. “We feel very excited in backing a very credible CEO.”

“We’re solving for the fact that there is no CEO in the business,” Daverman said.

Lucier added that now is a good time to acquire biotech companies, as a softening economy and more pressure for public companies to perform makes them more likely to spin off divisions outside of their core business. Lucier said Corza had already drummed up an “extraordinary” amount of interest from potential sellers.

“It gives us confidence that we’ll be deploying capital fairly quickly and successfully,” he said.